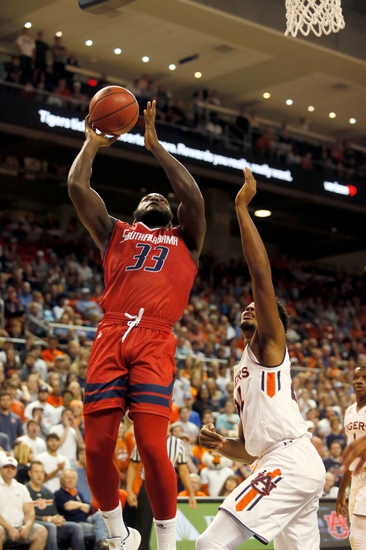 The Little Rock Trojans will travel to the Mitchell Center to take on the South Alabama Jaguars this Saturday night in College Basketball action.

The Little Rock Trojans won their 3rd straight game and improved to 14-7 (8-2 Sun Belt) on the season after defeating the Troy Trojans, 81-63, this past Wednesday. Little Rock went into halftime with a 37-34 lead and after had no trouble pulling away for the victory in the 2nd half after the Trojans took a 67-53 lead with 7:03 left in regulation. Little Rock shot 49.2% from the field while holding Troy to just 33.3% shooting from the field and 26.9% shooting from beyond the arc. Leading the way for the Trojans was Ty Gordon who had 15 points, 1 rebounds, 2 assists, and a steal.

Defensively, Little Rock is holding their opponents to an average of 65.7 ppg on 40.4% shooting from the field. The Trojans have a rebound margin of 4.9 and a turnover margin of -2.2.

The South Alabama Jaguars dropped to 12-9 (5-5 Sun Belt) on the season after being defeated by the Arkansas State Red Wolves, 75-71, this past Thursday night. South Alabama fought back from a 60-48 deficit with just 8:07 left to make it a game late, however, the offensive struggled down the stretch and the Jaguars couldn’t pull off the come from behind victory. South Alabama shot 50.0% from the field and 37.5% from beyond the arc in the loss. Leading the way for the Jaguars was Josh Ajayi who had 23 points, 9 rebounds, 1 assist, and 3 steals.

Defensively, South Alabama is allowing their opponents to average 67.9 ppg on 43.1% shooting from the field. The Jaguars have a rebound margin of -0.4 and a turnover margin of 2.1.

Little Rock comes into this game ranked 53rd in FG%, T-92nd in scoring defense, and 377th in defensive FG%.

The Jaguars have been decent on both ends  of the court this season as they come into this game ranked 50th in FG%, 147th in scoring defense, and 68th in turnover margin.