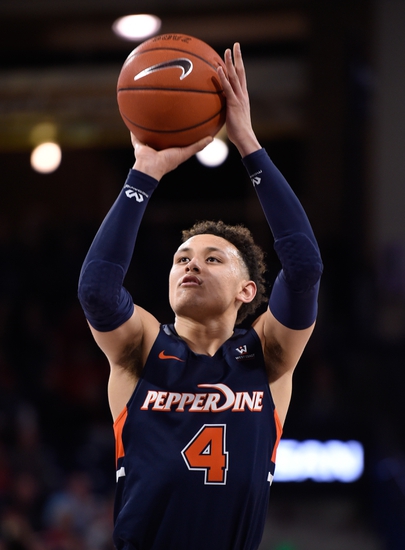 The Portland Pilots will travel to Firestone Fieldhouse to take on the Pepperdine Waves this Saturday night in College Basketball action.

The Portland Pilots lost their 4th straight game and dropped to 9-12 (1-5 WCC) on the season after being defeated by the Loyola Marymount Lions, 77-65, this past Thursday. Portland struggled offensively against the Loyola Marymount defense and couldn’t fight back after the Lions took a 59-43 lead with 9:13 left in regulation. Portland allowed Loyola Marymount to shoot 51.9% from the field while the Pilots shot just 33.9% from the field and 29.7% from beyond the arc. Leading the way for the Pilots was Jacob Tryon who had 12 points, 8 rebounds, 2 assists, and a steal.

Defensively, Portland is allowing their opponents to average 69.0 ppg on 41.9% shooting from the field. The Pilots have a rebound margin of -4.6 and a turnover margin of -0.3.

The Pepperdine Waves improved to 10-10 (3-3 WCC) on the season after defeating the Santa Clara Broncos, 90-86 in OT, this past Thursday night. Pepperdine missed a chance to win the game at the end of regulation after Colbey Ross missed a game-winning three-point attempt, however, the Waves were solid defensively in the OT period and were able to seal the victory after a pair of Colbey Ross free-throws gave the Waves a 4-point lead with just :09 seconds remaining. Pepperdine shot 43.5% from the field and 45.8% from beyond the arc in the victory. Leading the way for the Waves was Colbey Ross who had 24 points, 7 rebounds, 9 assists, and 3 steals.

Defensively, Pepperdine is allowing their opponents to average 77.2 ppg on 45.9% shooting from the field. The Waves have a rebound margin of -2.1 and a turnover margin of 1.3.

Portland has struggled on both ends of the court this season as the Pilots come in ranked just 265th in scoring offense, 179th in scoring defense, and 323rd in rebound margin.

Pepperdine has been solid offensively this season as the Waves rank 56th in scoring offense, 63rd in 3P-FG%, and 1st in FT%, however, the defense has struggled as Pepperdine currently ranks just T-328th in scoring defense and 275th in rebound margin.

It’s been a rough stretch for Portland, who has lost 9 of their last 10 games, and although their offense should be able to find some success on the offensive end agianst the Pepperdine defense, I just can’t trust a Portland team that has lost it’s last give games away from home (2 away; 3 neutral) by an average of 19.4 ppg. Pepperdine is a solid 6-3 at home this season and as I think their offense will be able to find success agianst the Pilots, I think the Waves do enough to cover this large home spread.