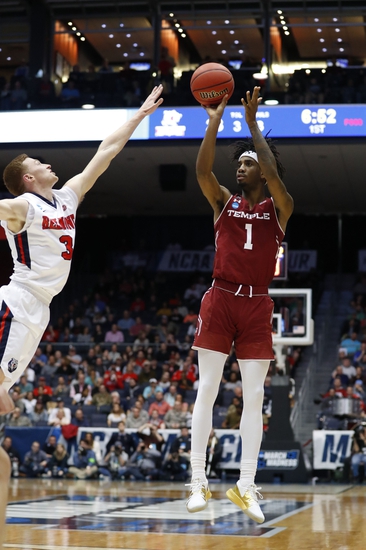 The Temple Owls will travel to The Palestra to take on the Pennsylvania Quakers this Saturday afternoon in College Basketball action.

The Temple Owls lost their 2nd straight game and dropped to 10-8 (2-5 AAC) on the season after being defeated by the Cincinnati Bearcats, 89-82, this past Wednesday night. Temple was outstanding on the offensive end agianst Cincinnati, however, the Owls couldn’t slow down the Bearcats defensively in the 2nd half and couldn’t fight back after Cincinnati took a 77-72 lead with 1:08 left in regulation. Temple lost despite shooting an impressive 53.4% from the field and 64.3% from beyond the arc. Leading the way for the Owls was Quinton Rose who had 26 points, 3 rebounds, 3 assists, 3 blocks, and 3 steals.

Defensively, Temple is holding their opponents to an average of 64.8 ppg on 40.9% shooting from the field. The Owls have a rebound margin of 0.9 and a turnover margin of 0.3.

The Pennsylvania Quakers lost their 3rd consecutive game and dropped to 7-7 (0-2 Ivy) on the season after being defeated by the Saint Joseph’s Red Hawks, 87-81, this past Saturday. Pennsylvania fought back from a 30-14 deficit midway through the 1st half to take a 61-60 lead with 10:12 remaining in regulation, however, the Quakers struggled defensively down the stretch and couldn’t fight back after Saint Joseph’s took a 76-64 lead with just 4:22 remaining. Pennsylvania allowed Saint Joseph’s to shoot 49.2% from the field and 44.4% from beyond the arc in the loss. Leading the way for the Quakers was AJ Brodeur who had 33 points, 7 rebounds, 3 assists, and 2 steals.

Defensively, Pennsylvania is allowing their opponents to average 74.6 ppg on 44.2% shooting from the field. The Quakers have a rebound margin of -1.2 and a turnover margin of -0.4.

Temple has been strong defensively this season as the Owls currently rank 75th in scoring defense and 34th in defensive FG%, however, Temple has struggled on the offensive end as they currently rank just 305th in FG%.

Pennsylvania has been led by their offense this season, as the Quakers rank 58th in scoring offense and 79th in FG%, however, the Quakers have struggled defensively and currently rank just 298th in scoring defense.

Pennsylvania was able to pick up a victory at Temple last season, however, this has been a series owned by the Owls throughout the years. Temple struggled as of late, however, between the fact that the Owls have a winning record on the road this season and that I think Quinton Rose and the Owls offense will be able to put up some points against the Quakers defense, I think the play is took Temple and the point in this one. Good Luck!