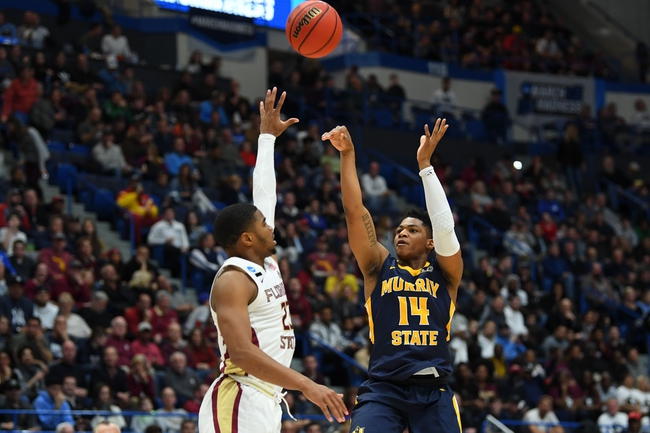 The Belmont Bruins and the Murray State Racers meet in MVC college basketball action from the CFSB Center on Thursday night.

The Belmont Bruins will look to build on their current five-game winning streak after a 77-59 win over Morehead State in their last outing. Nick Muszynski led the Bruins with 20 points on 8 of 10 shooting with 3 threes, 10 rebounds and 4 blocks for the double-double while Adam Kunkel added 16 points and Tyler Scanlon chipped in 12 points with 5 assists. Grayson Murphy added 10 points with 10 rebounds, a team-high 7 assists and 3 steals for a double-double of his own to round out the group of double-digit scorers for Belmont in the win. Kunkel leads Belmont in scoring with an average of 16.9 points per game while Murphy leads the Bruins in rebounding and assists with an average of 8.3 rebounds and 6.2 assists per game this season. As a team, Belmont is averaging 81.6 points per game on 47.6% shooting from the field, 36.3% from behind the arc and 71.7% from the foul line this season.

The Murray State Racers will look to add to their current seven-game winning streak after a 96-91 win over Southeast Missouri State in their last outing. Tevin Brown led the Racers with 29 points along with a 14 of 19 mark from the foul line and a team-high 6 assists. Anthony Smith added 22 points on 8 of 10 shooting with 10 rebounds for the double-double while KJ Williams chipped in 19 points on 7 of 11 shooting with 7 rebounds. Jaiveon Eaves added 13 points to cap off the group of double-digit scorers for Murray State in the win while Daquan Smith chipped in 8 points and 5 assists. Brown leads Murray State in scoring with an average of 17.7 points per game while Anthony Smith leads the Racers in rebounding with 7.8 rebounds per game and Daquan Smith leads Murray State in assists with 3.8 assists per game this season. As a team, Murray State is averaging 77.7 points per game on 48.8% shooting from the field, 35.2% from behind the arc and 70.2% from the foul line this season.

Both of these teams have been solid all season long, beating up on teams left and right and getting Belmont in a pick ‘em is kind of tempting as the Bruins have been the slightly better team so far this season. However, Murray State is a beast at home, outscoring their opponents by 21.7 points per game at home this season. I just don’t like going against Murray State at home and with one of the best teams in the conference coming to town, you can bet the Racers fans will be out in full force for this one. I’ll back Murray State at home here.