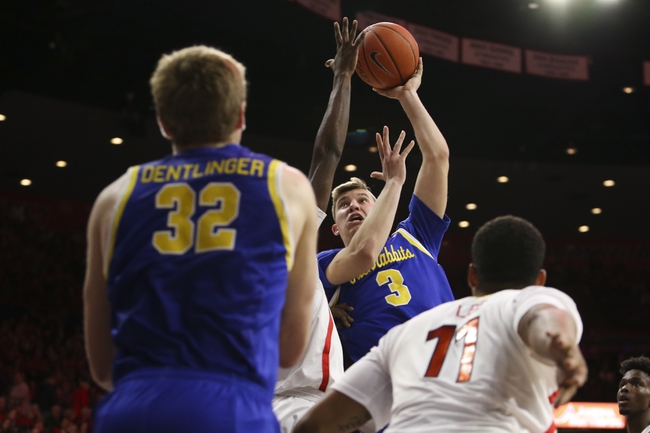 The North Dakota State Bison will look to keep the ball rolling after winning 5 of their last 6 games after an 83-74 win over North Dakota last time out. Tyson Ward led the Bison with 27 points on 11 of 22 shooting with team-highs of 11 rebounds and 6 assists for the double-double while Vinnie Shahid added 22 points on 6 of 14 shooting with an 8 of 8 mark from the foul line and 5 assists. Tyree Eady added 10 points with 3 steals fo cap off the trio of double-digit scorers for North Dakota State in the winning effort. Shahid leads North Dakota State in scoring with an average of 16.8 points per game while Ward leads the Bison in rebounding and assists with an average of 7.4 rebounds and 3.1 assists per game this season. As a team, North Dakota State is averaging 72.8 points per game on 44.2% shooting from the field, 34.6% from behind the arc and 78% from the foul line this season.

This line feels suspiciously low given how well the Jackrabbits have played at home this season. However, if the line’s a trap, I’m going to bite. North Dakota State’s been playing well right now, but you have to imagine that South Dakota State will look to make amends in front of their home fans after being beat up by an in-state rival, in a game that by all intents and purposes, the Jackrabbits should’ve won easily. Both teams have done well in conference, but the Jackrabbits are outscoring teams by 19.8 points per game at home and holding opponents to just 62.4 points per game. I think the Jackrabbits are more than capable of winning this one by a couple of buckets so I’ll lay the points with South Dakota State in this one.