The Rutgers Scarlet Knights will look to build on back-to-back wins after a 64-56 win over Minnesota in their last outing. Montez Mathis, Ron Harper Jr. and Jacob Young each had a team-high 11 points with Mathis shooting 4 of 6 with a pair of threes and a pair of steals. Caleb McConnell added 10 points with 12 rebounds for the double-double to cap off the scoring in double figures for Rutgers in the win. Myles Johnson added 7 points with 10 rebounds as well in the victory. Harper Jr. leads Rutgers in scoring with 11.8 points per game while Johnson leads the Scarlet Knights in rebounding with 8.2 rebounds per game and Geo Baker leads Rutgers in assists with 3.9 assists per game this season. As a team, Rutgers is averaging 71 points per game on 46% shooting from the field, 30.3% from behind the arc and 63.6% shooting from the foul line this season.

The Iowa Hawkeyes will look to add to their current three-game winning streak after a 90-83 win over Michigan in their last outing. Luka Garza led the Hawkeyes with 33 points on 10 of 18 shooting with an 11 of 13 mark from the foul line and 7 rebounds while CJ Fredrick added 21 points on 6 of 9 shooting with 3 threes and 3 assists and Joe Wieskamp chipped in 20 points with 3 threes, a 9 of 10 mark from the foul line and 3 assists of his own. Ryan Kriener added 14 points on 6 of 8 shooting to finish off the scoring in double figures for Iowa in the win while Connor McCaffery added team-highs of 13 rebounds and 5 assists despite being held scoreless. Garza leads Iowa in scoring and rebounding by averaging a double-double per game with an average of 22.9 points and 10.2 rebounds per game while McCaffery leads the Hawkeyes in assists with 3.7 assists per game this season. As a team, Iowa is averaging 79.9 points per game on 45.4% shooting from the field, 36.1% from 3-point range and 73.7% from the foul line this season.

I considered the points with Rutgers as this is the best I can remember the Scarlet Knights looking in some time, and both teams are outscoring their opposition in conference play by the same 5.3 points per game margin this season. However, Rutgers has had issues on the road in conference play, putting up just 51 against Illinois and a double-digit loss to Michigan State. Iowa has stepped up their play lately and have the kind of physical team that can make life rough for Rutgers, especially on the road. I just think this is a game that Rutgers stumbles in, so I’ll lay the points with the Hawkeyes at home here. 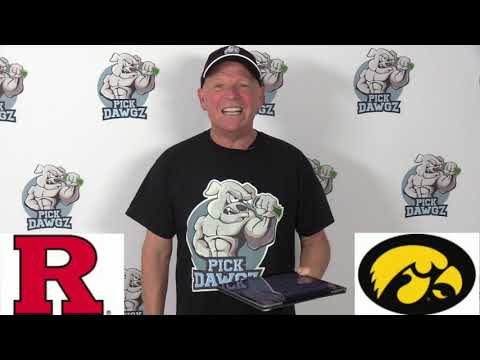