The Miami Hurricanes and the Duke Blue Devils meet in college basketball action from Cameron Indoor Stadium on Tuesday.

Miami enters this one at 10-7 so far. The Hurricanes are 1-4 in their last five games, beating Pittsburgh while otherwise falling to Duke, Louisville, NC State and Florida State in that time.

In the OT loss to the Seminoles, Miami’s Chris Lykes led the way on 24 points with two assists. Dejan Vasilijevic added 19 points and three boards there, and Kameron McGusty had 15 points and six assists.

Over on the Duke side, they’re 15-3 so far. After a nine-game winning streak, the Blue Devils have lost their last two consecutive games versus Clemson 79-72 and Louisville 79-73.

In the loss to the Cardinals, Duke’s Cassius Stanley posted 24 points with 11 rebounds. Matthew Hurt had 16 points there, and both Vernon Carey and Tre Jones provided 12 points apiece for the Devils in that one.

Miami held in there with Florida State pretty well, pushed them to OT and only ended up losing by four points. It was a nice bounce-back game after falling by 17 points to NC State, and taking a somehow dull eight-point win over Pitt.

As for Duke, they’ve really taken it on the chin over the last two games, and they really need a convincing, cohesive win here. I think the Blue Devils will get that against a sputtering Hurricanes team. I’m going Duke on the cover. 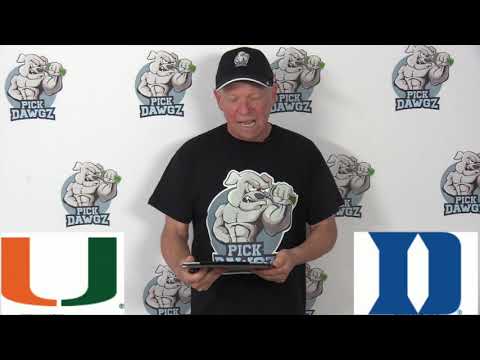