The Rice Owls and the North Texas Mean Green meet in C-USA college basketball action from the UNT Coliseum on Monday night.

The Rice Owls could use a win after losing six of their last seven games after an 81-68 loss to Southern Miss in their last outing. Trey Murphy III led the Owls with 20 points including 4 threes and 5 rebounds while Josh Parrish added 13 points on 6 of 6 shooting with 6 rebounds and a team-high 4 assists as the only other Rice player to score in double-digits in the loss. Drew Peterson added 5 points with a team-high 8 rebounds while Ako Adams added 4 assists of his own in the loss. Murphy III leads Rice in scoring with an average of 14 points per game while Peterson leads the Owls in rebounding and assists with 6.6 rebounds and 3.2 assists per game this season. As a team, Rice is averaging 73.3 points per game on 42.4% shooting from the field, 32.9% from behind the arc and 70.2% from the foul line this season.

The North Texas Mean Green will look to add to their current five-game winning streak after a 51-50 win over Louisiana Tech last time out. Umoja Gibson led the Mean Green with 15 points on 5 of 12 shooting with 3 threes and a pair of steals while Zachary Simmons added 12 points on 6 of 10 shooting as the only other double-digit scorer for North Texas in the win. James Reese and Thomas Bell each had a team-high 5 rebounds while Javion Hamlet had 8 points and a team-high 4 assists. Gibson leads North Texas in scoring with an average of 14.2 points per game while Hamlet leads the Mean Green in assists with 4.6 assists per game and Deng Geu leads North Texas in rebounding with 6.2 rebounds per game this season. As a team, North Texas is averaging 69.6 points per game on 47.1% shooting from the field, 38.3% from behind the 3-point line and 72.9% from the foul line this season.

This feels like a lot of points to lay with North Texas as we haven’t really associated the Mean Green with these big numbers let alone covering them. However, the Mean Green are rolling right now, flattening teams with their suffocating defense as well as covering games left and right. Rice has just been struggling, and it’s hard to make a case for the Owls with bad double-digit losses to teams like Southern Miss and Sam Houston State. I just don’t see Rice doing enough to keep this one within the number so I’ll lay the points with North Texas in this spot.

Get Premium Picks Start Winning Now »
The pick in this article is the opinion of the writer, not a PickDawgz site consensus.
Previous Pick
Morgan State vs. North Carolina A&T - 1/20/20 College Basketball Pick, Odds, and Prediction
Next Pick
Arkansas-Pine Bluff vs. Alcorn State - 1/20/20 College Basketball Pick, Odds, and Prediction 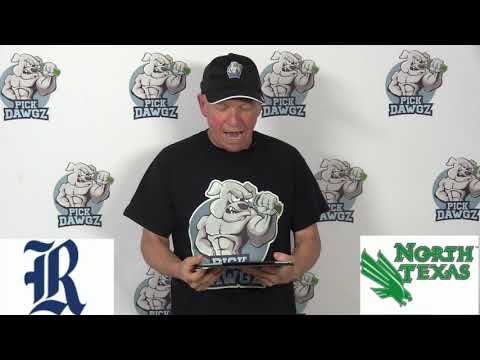