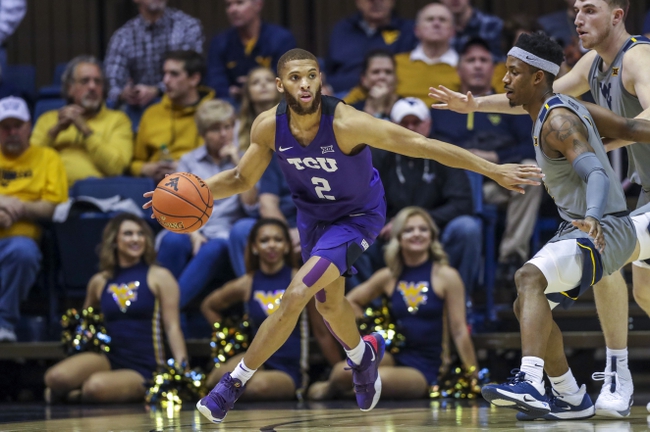 The TCU Horned Frogs and the Oklahoma Sooners meet in Big 12 conference college basketball action from the Lloyd Noble Center on Saturday afternoon.

The TCU Horned Frogs will look to rebound after an 81-49 beatdown loss to West Virginia in their last outing. RJ Nembhad led the Horned Frogs with 14 points along with a team-high 6 rebounds while Desmond Bane added 13 points with a pair of threes and 4 boards as the only other double-digit scorer for TCU in the losing effort. Bane leads TCU in scoring with an average of 16.9 points per game while Nembhard leads the Horned Frogs in assists with 3.5 assists per game and Kevin Samuel leads the Horned Frogs in rebounding with 8.6 rebounds per game this season. As a team, TCU is averaging 70.3 points per game on 43.4% shooting from the field, 36.4% from behind the arc and 62.6% from the foul line this season.

The Oklahoma Sooners will look to rebound from back-to-back defeats after a 66-52 loss to Kansas last time out. Kristian Doolittle and Devion Harmon tied for the team-high with 13 points with Doolittle adding 10 rebounds for the double-double while Harmon added 3 triples. Brady Manek added 10 points with 7 rebounds and a pair of blocks to finish off the trio of double-digit scorers for Oklahoma in the losing effort while Jamal Bieniemy added 6 points with a team-high 4 assists. Doolittle leads Oklahoma in scoring and rebounding with an average of 16.8 points and 8.8 rebounds per game while Bieniemy leads the Sooners in assists with 2.8 assists per game this season. As a team, Oklahoma is averaging 72.6 points per game on 42.3% shooting from the field, 31.5% from behind the arc and 76.6% from the foul line this season.

I can excuse the loss to Kansas for the Sooners as a lot of teams have fallen to Kansas this season. However, the loss to Iowa State (even on the road) is hard to stomach, as the Cyclones haven’t been anything special this season. TCU was demolished against West Virginia, and scoring has been an issue for TCU over the last couple of games, but the Sooners just don’t cover the number at home and TCU is simply playing better basketball over the last month or so. I’ll side with TCU on the road in this one.