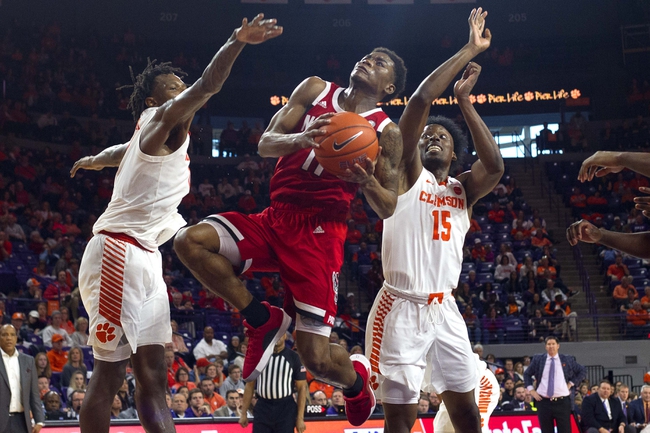 The Clemson Tigers and the NC State Wolfpack meet in college basketball action from PNC Arena on Saturday.

Clemson enters this game at 9-7 so far. The Tigers are riding a three-game win streak right now, taking out NC State, North Carolina and Duke during that stretch of outings.

In the upset over Duke, the Tigers were led by Aamir Simms, with 25 points, nine rebounds and five assists. Also posting a nice line for Clemson there was Tevin Mack with 22 points and nine rebounds.

Over on the NC State side, they’re 12-5 this year. The Wolfpack are 2-2 in their last four games, falling to Clemson and Virginia Tech while otherwise beating Notre Dame and Miami in that time.

In the win over the Hurricanes, NC State’s Derek Funderburk topped the team with 19 points and eight rebounds. Devon Daniels added 15 points and two boards there, and Jericole Hellems had 11 points and three rebounds.

Clemson got some big performances and some solid secondary numbers in their shocking victory over Duke, and they’ll be riding high here. The Tigers have now put up at least 79 points in three straight games.

The Tigers won 81-70 at home the last time these teams met, which kicked off this nice run for Clemson. I don’t know that the Tigers will be able to maintain this offensive output though, and NC State isn’t going to get caught off-guard here. I’m going Wolfpack on the cover.