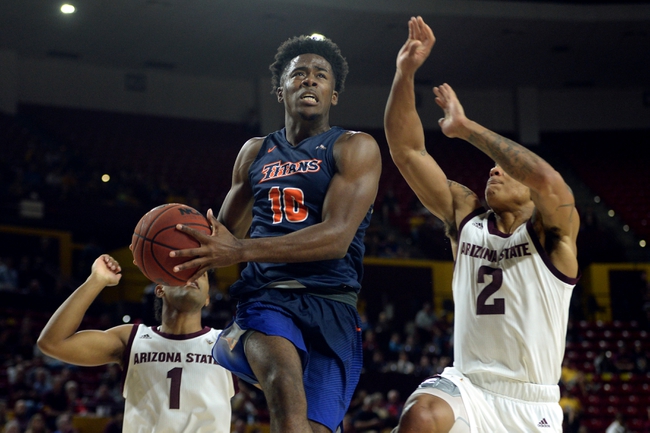 Where to Watch: Big West Conference Stream College Basketball all season on ESPN+. Sign up now!

The CSU Fullerton Titans will travel to the Walter Pyramid to take on the Long Beach State 49ers this Saturday night in College Basketball action.

The CSU Fullerton Titans lost their 3rd straight game and dropped to 5-13 (0-3 Big West) on the season after being defeated by the UC Irvine Anteaters, 74-61, this past Wednesday. CSU Fullerton struggled offensively agianst UC Irvine and couldn’t fight back after they went into halftime trailing by a 39-25 margin. CSU Fullerton shot just 38.5% from the field and 28.6% from beyond the arc in the loss. Leading the way for the Titans was Jackson Rowe who had 18 points, 5 rebounds, 2 blocks, and an assist.

Defensively, CSU Fullerton is allowing their opponents to average 67.0 ppg on 42.8% shooting from the field. The Titans have a rebound margin of -3.7 and a turnover margin of -0.2.

The Long Beach State 49ers dropped to 6-13 (1-2 Big West) on the season after being defeated by the UC David Aggies, 85-82, this past Thursday. Long Beach State had no answers on the defensive end against the Aggies and couldn’t fight back after UC Davis took a 76-66 lead with 1:31 left in regulation. Long Beach State loss despite shooting 52.9% from the field and 52.6% from beyond the arc. Leading the way for the 49ers was Chance Hunter who had 28 points, 7 rebounds, and an assist.

Defensively, Long Beach State is allowing their opponents to average 78.2 ppg on 45.5% shooting from the field. The 49ers have a rebound margin of -4.1 and a turnover margin of -1.8.

CSU Fullerton has lost 10 of their last 12 games and have really struggled on the offensive end this season as they come into this game ranked 325th in scoring offense & 254th in FG%.

Long Beach State has lost 4 of their last 6 games and haven’t shown much on either end of the court this season as the 49ers currently rank 254th in scoring offense, 330th in scoring defense, and 291st in defensive FG%.

CSU Fullerton has struggled this season, however, their defense has been decent, ranking T-129th in scoring defense, and they do have an impressive win at UCLA this season. CSU Fullerton can struggle offensively, however, I think they’ll find some success against a Long Beach State defense that hasn’t been able to stop anyone all season and as I think this will be a close game, I’m taking CSU Fullerton and the points in this one. Good Luck!