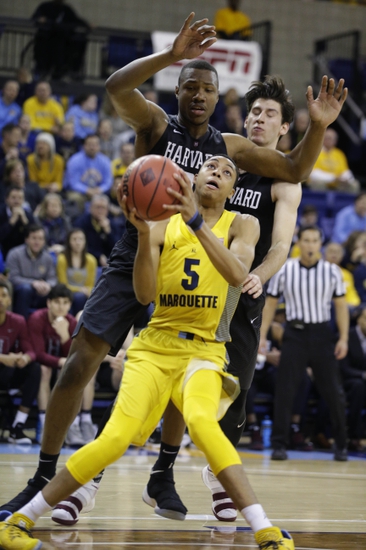 The Dartmouth Big Green will travel to Lavietes Pavilion to take on the Harvard Crimson this Saturday afternoon in College Basketball action.

The Dartmouth Big Green lost their 3rd consecutive game and dropped to 7-8 (0-0 Ivy League) on the season after being defeated by the Vermont Catamounts, 77-68, on January 7th. Dartmouth gave Vermont all they could handle and had the game tied at 62-all with 4:47 remaining, however, the Big Green struggled offensively down the stretch and couldn’t pull off the upset victory. Dartmouth shot 52.2% from the field, however, did lose the turnover battle by a 18-8 margin in the loss. Leading the way for the Big Green was Aaryn Rai who had 18 points, 6 rebounds, and a block.

Defensively, Dartmouth is holding their opponents to an average of 64.3 ppg on 41.5% shooting from the field. The Big Green have a rebound margin of 2.9 and a turnover margin of -0.5.

The Harvard Crimson won their 6th straight game and improved to 11-4 (0-0  IVY) on the season after defeating the UC Irvine Anteaters, 77-73, on January 4th. Harvard held a commanding 55-36 lead with 12:20 left in regulation and held off a late charge by the Anteaters to remain a perfect 5-0 at home this season. Harvard shot 47.2% from the field and 40.9% from beyond the arc in the victory. Leading the way for the Crimson was Christian Juzang who had 15 points, 2 rebounds, 5 assists, and a steal.

Defensively, Harvard is holding their opponents to an average of 65.7 ppg on 40.7% shooting from the field. The Crimson have a rebound margin of 4.3 and a turnover margin of -0.5.

Dartmouth comes into this game losing 7 of their last 9 games and although their defense has been decent, ranking 70th in scoring defense, the offense has struggled as the Big Green rank just 282nd in scoring offense, 223rd in three-point FG%, and 324th in FT%.

Harvard has been impressive during their 6-game winning streak which included solid road wins agianst George Washington, California, & San Francisco and have been decent on both ends of the court as the Crimson currently rank 115th in scoring offense & 91st in scoring defense.

Dartmouth was competitive at home agianst a good Vermont team, however, the Big Green are just 3-5 on the road this season and have lost 5 of their last 6 games agianst Harvard. Harvard should have a considerable advantage in the front court in this match-up and as I think their defense will give Dartmouth’s offense trouble, I think Harvard opens up conference play with a big win and covers this spread.