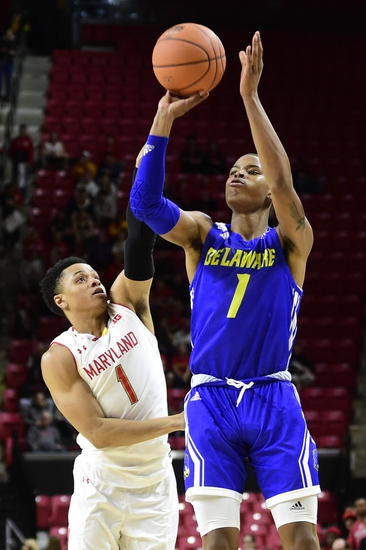 The Elon Phoenix will travel to the Bob Carpenter Center to take on the Delaware Blue Hens this Saturday afternoon in College Basketball action.

The Elon Phoenix dropped to 5-14 (1-5 CAA) on the season after being defeated by the Drexel Dragons, 63-41, this past Thursday. Elon led by a 21-20 margin at halftime, however, struggled on both ends of the court in the 2nd half and couldn’t fight back after Drexel took a 38-25 lead with 12:54 left in regulation. Elon shot just 31.0% from the field, 16.7% from beyond the arc, and was outrebounded by a 44-29 margin in the loss. Leading the way for the Phoenix was Hunter McIntosh who had 12 points, 8 rebounds, 2 assists, and a steal.

Defensively, Elon is allowing their opponents to an average of 71.7 ppg on 43.3% shooting from the field. The Phoenix have a rebound margin of -1.9 and a turnover margin of -0.8.

The Delaware Blue Hens lost their 2nd consecutive game and dropped to 12-7 (2-4 CAA) on the season after being defeated by the William & Mary Tribe, 77-68, this past Thursday. Delaware had no answers for the Tribe’s Nathan Knight and couldn’t fight back after William & Mary took a 61-51 lead with 9:16 left in regulation. Delaware shot 43.9% from the field and lost the turnover battle by a 15-9 margin in the loss. Leading the way for the Blue Hens was Kevin Anderson who had 25 points, 1 rebounds, 4 assists, 2 blocks, and a steal.

Defensively, Delaware is allowing their opponents to average 69.1 ppg on 41.6% shooting from the field. The Blue Hens have a rebound margin of -0.7 and a turnover margin of -0.7.

Elon has been solid when it comes to three-point shooting this season as they rank 13th in three-pointers made per game and 60th in 3P-FG%, however, that has really been the only positive for the Phoenix as overall they’ve struggled on both ends of the court as they currently rank 277th in scoring offense, T-308th in FG%, and 240th in scoring defense.

Delaware has struggled as of late, losing 4 of their last 5 games, however, they’ve been a solid offensive team this season, ranking 128th in scoring offense, 29th in FG%, 57th in 3P-FG%, and 47th in FT%.

Elon comes into this game with an 0-9 record on the road this season and haven’t had much success at the Bob Carpenter Center as of late, losing their last four game at Delaware. Elon has the ability to keep games close with their ability to hit three-pointers, however, Delaware is the better team on both ends of the court and as the Blue Hens offense should have no trouble piling up points agianst the Elon defense, I’m taking Delaware to cover this double digit home spread.