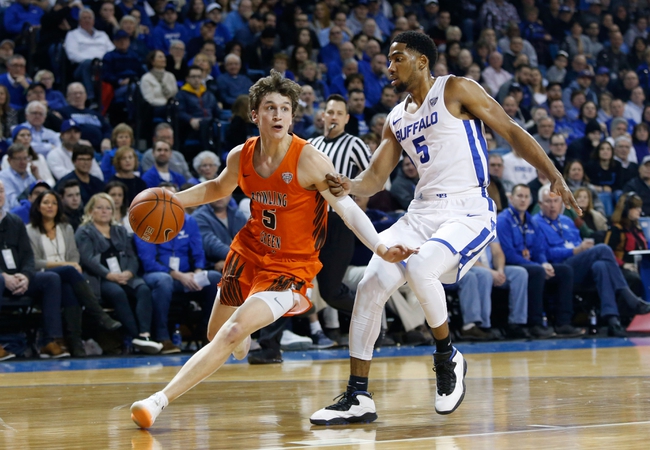 The Northern Illinois Huskies and the Bowling Green Falcons meet in college basketball MAC-tion from the Stroh Center on Saturday afternoon.

The Northern Illinois Huskies will look to find some consistency after alternating wins and losses in each of their last seven games following a 72-49 loss to Akron last time out. Eugene German led the Huskies with 17 points along with a team-high 8 rebounds while Tyler Cochran added 10 points and 7 rebounds as the only other double-digit scorer for Northern Illinois in the losing effort. Noah McCarty added 8 rebounds of his own as well in the defeat for NIU. German leads the Huskies in scoring and assists with an average of 20.2 points and 2.8 assists per game while Lacey James leads the Huskies in rebounding with 7.7 rebounds per game this season. As a team, Northern Illinois is averaging 67.7 points per game on 40.8% shooting from the field, 33.7% from behind the 3-point line and 66.7% from the foul line this season.

The Bowling Green Falcons will loo to add to their current three-game winning streak after an 85-82 win over Western Michigan in their last outing. Daeqwon Plowden led the Falcons with 19 points on 8 of 11 shooting with 6 rebounds while Dylan Frye added 16 points with 3 assists. Justin Turner and Marlon Sierra each had 12 points to round out the scoring in double figures for the Falcons in the win with Sierra adding a team-high 8 rebounds while Turner had 7 rebounds. Michael Laster added 4 points with a team-high 8 assists as well in the victory. Turner leads Bowling Green in scoring with an average of 17.9 points per game while Plowden leads the Falcons in rebounding with 7.6 rebounds per game and Dylan Frye leads Bowling Green in assists with 4.3 assists per game this season. As a team, Bowling Green is averaging 76.5 points per game on 42.9% shooting from the field, 32.7% from behind the arc and 73.6% from the foul line this season.