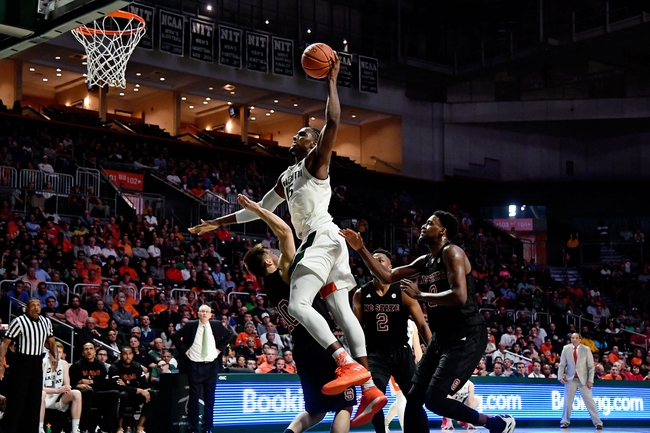 The Miami Hurricanes and the NC State Wolfpack meet in ACC college basketball action from the PNC Arena on Wednesday night.

The Miami Hurricanes will look to pick up some momentum after a 66-58 win over Pitt last time out. Kameron McGusty led the Hurricanes with 19 points on 8 of 12 shooting with 3 threes while Dejan Vasiljevic added 13 points with 3 threes as well. Chris Lykes added 12 points with 4 assists to round out the trio of double-digit scorers for Miami in the win. Sam Waardenburg added 7 points with 10 rebounds and 3 assists while Harlond Beverly added 6 points with a team-high 5 assists. McGusty leads Miami in scoring with an average of 15.4 points per game while Waardenburg leads the Hurricanes in rebounding with 6.8 rebounds per game and Lykes leads Miami in assists with 2.9 assists per game this season. As a team, Miami is averaging 72.7 points per game on 45.4% shooting from the field, 35.8% from behind the 3-point line and 71.5% from the foul line this season.

The NC State Wolfpack will try to find some consistency after alternating wins and losses in each of their last four games after a 72-58 loss to Virginia Tech last time out. DJ Funderburk led the Wolfpack with 18 points on 7 of 13 shooting with a team-high 9 reboudns while Pat Andree added 11 points with 7 rebounds as the only other NC State player to score in double figures in the loss. Devon Daniels added 7 points with 7 rebounds and 3 blocks while Markell Johnson had 5 points with 7 rebounds and a team-high 9 assists. C.J. Bryce missed the last game with a concussion but still leads NC State in scoring and rebounding with an average of 16.1 points and 6.8 rebounds per game while Markell Johnson leads the Wolfpack in rebounding with 7 rebounds per game this season. As a team, NC State is averaging 78.4 points per game on 45.8% shooting from the field, 33% from behind the arc and 71.5% from the foul line this season.

I get NC State being favored at home, but the Wolfpack haven’t really been overly consistent with their results to the point that I want to lay this many points with them against a Miami team that’s got some solid talent in their own right. Each of the last 3 head-to-head meetings have been decided by exactly 5 points so I’ll look for some of the same here and I’ll take Miami and the points in this one.