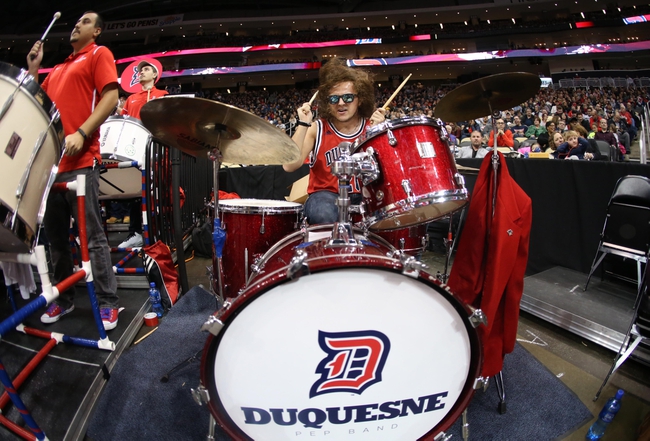 The Fordham Rams and the Duquesne Dukes meet in A-10 conference college basketball action from the PPG Paints Arena on Wednesday night.

The Fordham Rams will look to bounce back after losing three straight and 7 of their last 8 games after a 64-44 loss to St. Bonaventure last time out. Ivan Raut led the Rams with 12 points coming on 4 threes as the lone Fordham player to score in double figures in the loss while Jalen Cobb added 8 points with a team-high 4 assists. Joel Soriano grabbed a team-high 6 rebounds while Josh Colon and Chris Austin each had 8 points. Chuba Ohams is done for the year with a knee injury which is a big blow as Ohams led the Rams with 11 points and 8.2 rebounds per game while Antwon Portley, who is also dealing with an ankle injury leads the Rams in assists with 3.3 assists per game this season. As a team, Fordham is averaging 59.7 points per game on 38.4% shooting from the field, 30.9% from behind the 3-point line and 62.1% from the foul line this season.

The Duquesne Dukes will look to add to their current four-game winning streak after a 66-61 win over George Washington in their last outing. Marcus Weathers led the Dukes with 13 points on 6 of 11 shooting with 10 rebounds and 3 steals for the double-double. Michael Hughes and Tavian Dunn Martin each had 12 points with Hughes adding 7 rebounds with 4 blocks while Dunn-Martin hit 4 threes with a team-high 4 assists and 3 steals. Sincere Carry added 11 points with 8 rebounds to finish off the scoring in double figures in the winning effort. Weathers leads Duquesne in scoring and rebounding with an average of 14.3 points and 8.1 rebounds per game while Carry leads the Dukes in assists with 4.5 assists per game this season. As a team, Duquesne is averaging 72.9 points per game on 45.7% shooting from the field, 31.7% from behind the arc and 77.8% from the foul line this season.

This feels like an absolute ton to be laying with Duquesne, but these two teams are heading in completely different directions right now and if that wasn’t bad enough for Fordham, the Rams now have to go without their top scorer and rebounder in Ohams for the rest of the season and may be without their top assist man in Portley as well. I just think this could be a beatdown so I’ll lay the points with Duquesne in this one.