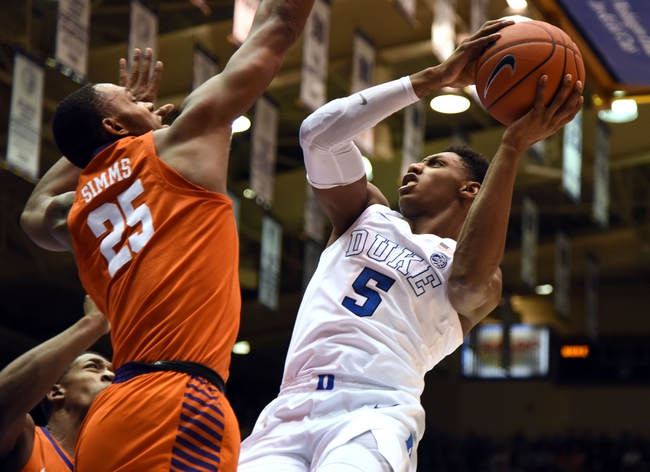 The Duke Blue Devils and the Clemson Tigers meet in college basketball action from Littlejohn Coliseum on Tuesday.

In the win over the Deacons, Duke’s lead scorer was Tre Jones with 23 points, five assists and three rebounds. Cassius Stanly added 16 points and four boards there, while Jack White and Joey Baker each had 11 points.

Over on the Clemson side, they’re 8-7 overall. After falling in consecutive games versus Yale and Miami-FL, the Tigers have won their last two versus NC State and North Carolina.

In the OT win over the Tar Heels, Clemson’s Aamir Simms posted 20 points with eight rebounds and six assists. Both John Newman and Tevin Mack supplied 17 points there, combining for four assists and 10 rebounds.

Since their lone loss this season to SFA, the Blue Devils have been rolling right along. Duke has put up at least 73 points in each of those nine games, and really hasn’t had much trouble with any team during that time.

As for Clemson, they’ve been pretty choppy scoring-wise lately (45 versus Yale, 54 versus SC, etc.) but have posted 160 combined points in their last pair. Still, I don’t think Duke will have too many issues here.