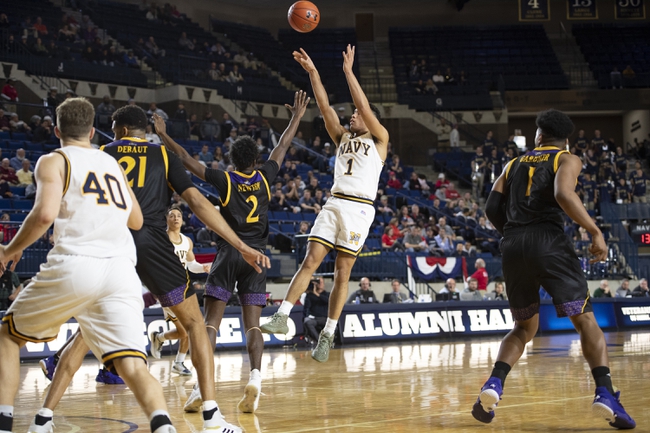 The Navy Midshipmen and the Bryant Bulldogs meet in college basketball action from Chace Athletic Center on Monday night.

The Navy Midshipmen will look to build on back-to-back wins after a 76-56 win over Brown in their last outing. John Carter Jr. led the way with 26 points on 9 of 18 shooting with 6 threes and 6 rebounds with 3 steals and a pair of blocks while Cam Davis added 24 points as the only other double-digit scorer for Navy in the win with a 10 of 12 mark from the foul line as well as a team-high 4 assists. Greg Summers added 9 points with 6 rebounds and 4 assists of his own while Luke Loehr added 6 boards and 3 steals as well. Davis leads Navy in scoring and assists with an average of 16.3 points and 3 assists per game while Summers leads Navy in rebounding with an average of 7.9 rebounds per game this season. As a team, Navy is averaging 65.9 points per game on 42.1% shooting from the field, 32.2% from behind the 3-point line and 69.9% from the foul line this season.

The Bryant Bulldogs will look to bounce back from back-to-back losses after an 87-76 overtime loss to New Hampshire last time out. Adam Grant led the Bulldogs with 29 points on 11 of 25 shooting with 4 threes, 3 steals and a pair of blocks. Ikenna Ndugba added 16 points with 3 steals as well as the only other double-digit scorer for Bryant in the win. Patrick Harding added 4 points and a team-high 9 rebounds while Benson Lin had 9 points with a pair of steals and Charles Pride chipped in 7 points with 6 rebounds and a pair of steals. Grant leads Bryant in scoring with 21 points per game while Harding leads the Bulldogs in rebounding with 12.3 boards per game and Michael Green III leads Bryant in assists with 4 helpers per game this season. As a team, Bryant is averaging 79 points per game on 42.9% shooting from the field, 31.7% from behind the arc and 67.2% from the foul line this season.

Bryant should probably be favored as they’re outscoring Navy by an average of 13.1 points per game this season. However, when lesser known schools play each other, I try to see if there are common opponents to see how both performed, and while Navy stomped Brown by 20 last time up as 7.5-point underdogs, the Bulldogs lost to Brown by 2 to start the year at home. I also think that Navy has played the slightly tougher schedule up to this point, so I’ll take a shot at the free bucket with Navy here.