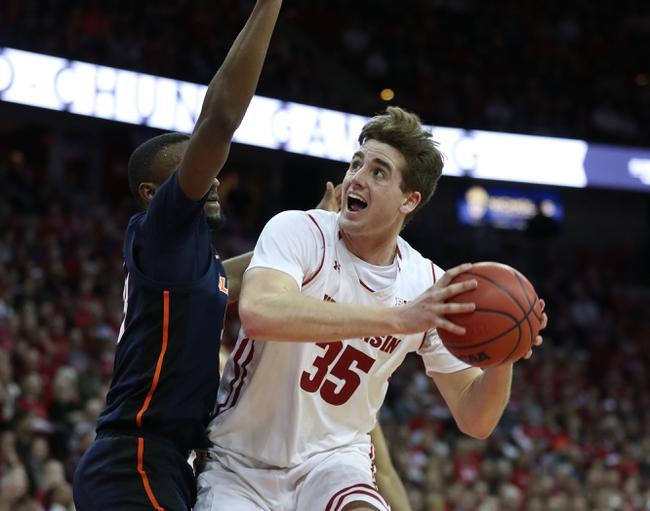 The Wisconsin Badgers and the Saint Mary’s Gaels meet in opening night college basketball action from the Sanford Pentagon on Tuesday night.

The Wisconsin Badgers come into the 2019-20 season looking to keep the ball rolling after a decent 2018-19 season that saw Wisky finish with a 23-11 overall mark, including a 14-6 record in Big Ten conference play to finish in 4th place. Wisconsin defeated Nebraska in the quarterfinals before losing out to eventual tournament champion Michigan State in the semifinals. The Badgers received an invite to the NCAA tournament as a #5 seed where the Badgers lost their opening matchup to 12-seed Oregon. The bad news for Wisconsin is that double-double machine Ethan Happ is no longer with the program after graduating and taking his talents to Europe and Khalil Iverson is gone as well. However, the Badgers bring back a pair of double-digit scorers in Brad Davison and D’Mitrik Trice while also returning some key pieces like Kobe King and Nate Reuvers, with Reuvers expecting to step up his play to fill the void left by Happ’s departure. As a team, Wisconsin averaged 68.6 points per game on 44.9% shooting from the field, 35.9% from behind the 3-point line and 64.8% from the foul line last season.

The Saint Mary’s Gaels will look to build on a decent 2018-19 campaign that saw the Gaels finish with an overall record of 22-12, including an 11-5 mark in WCC conference play, finishing in a tie with BYU for 2nd but earning the 2-seed after a tiebreaker with the Cougars. Saint Mary’s beat San Diego in the semifinals before stifling top-seeded Gonzaga in the championship game to earn the WCC’s automatic bid to the NCAA tournament. The Gaels entered the tournament as a #11 seed, being bounced in the first round by Villanova. The upside for Saint Mary’s is that their best pieces return, including leading scorer Jordan Ford, who broke the 20-point barrier 20 times for the Gaels last season along with Malik Fitts who averaged 15.2 points and a team-high 7.6 rebounds per game last season. The Gaels also got a big boost in the paint, and I mean big, bringing in Aaron Menzies as a transfer from Seattle. The 7’3” Menzies got an extra year of eligibility after tearing tendons in his hand, but will use this last season to help propel Saint Mary’s inside. Only time will tell if the Gaels can continue their run of 12 straight 20+ win seasons and get back to the NCAA tournament, but with guys like Ford and Fitts leading the charge, it should be in the cards for Saint Mary’s come March. As a team, Saint Mary’s is averaging 72.4 points per game on 47.2% shooting from the field, 37.8% from behind the arc and 74.2% from the foul line last season.

Part of me would like to give Wisconsin a chance with the free bucket here. However, I need to see that Wisconsin can handle themselves in the post-Ethan Happ era before instilling faith in the Badgers, especially against a quality team like St. Mary’s as so much of last year’s success was predicated on what happened with Happ. St. Mary’s has some strong pieces with the likes of Ford and Fitts leading the way, and I just think that the Gaels are better suited to start the season with a win on a neutral floor, so I’ll lay the points with St. Mary’s in this one.