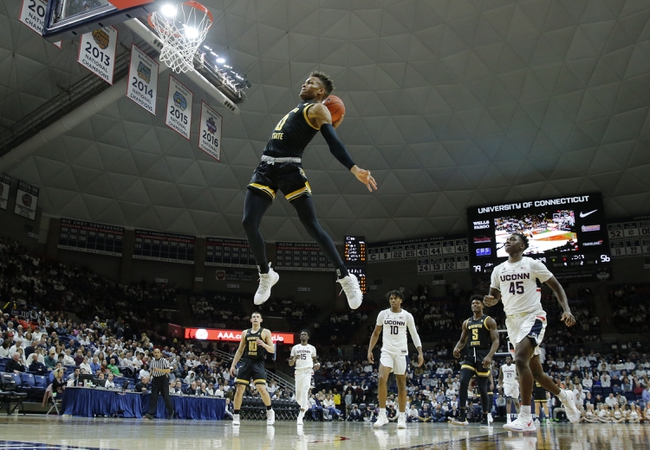 The Omaha Mavericks and the Wichita State Shockers meet in opening night college basketball action from the Charles Koch Arena on Tuesday night.

The Omaha Mavericks come into the 2019-20 season looking to improve on a decent 2018-19 season, finishing the regular season with an overall record of 21-11, including an outstanding 13-3 mark in Summit League play, finishing with the 2nd seed in the conference tournament. Omaha defeated North Dakota in the quarterfinals and IPFW in the semis before falling to North Dakota State in the conference championship game. Despite the 21 wins, the Mavericks didn’t participate in any postseason action. The bad news for the Mavs is that their top two scorers from last season in Zach Jackson and Mitchell Hahn have both graduated from the program. The good news is that their other three double-digit scorers are all back, including JT Gibson who averaged 12.9 points, Matt Pile, who had 11.2 points and a team-high 7.9 rebound and KJ Robinson who had 11.1 points and a team-high 3.3 assists per game last season. Only time will tell if Omaha can take another step forward and make a run at leading the Summit League this season.

The Wichita State Shockers will look to bounce back this year, after missing the NCAA tournament field of 68 for the first time since 2010-11 after finishing with an overall record of 22-15, including a 10-8 record in AAC play, for the 6th seed in the conference tournament. The Shockers took down East Carolina and upset Temple in the quarterfinals before falling to eventual conference champion Cincinnati in the conference championship game. The Shockers received an invite to the NIT, where Wichita State defeated Furman, Clemson and Indiana on the way to the tournament semifinals, where their run ended at MSG with a 71-64 loss to Lipscomb. The bad news for Wichita State is that two of their top scorers in Markis McDuffie and Samajae Haynes-Jones are both graduates from the program, but the Shockers bring back seven players from last year’s rotation, including three starters. Jaime Echenique is back after logging 9.2 points as well as a team-high 6 rebounds and 1.4 blocks per game. Dexter Dennis is also back after finishing on the all-AAC freshman team with 8.4 points as well as a 40% mark from three-point range last season. Only time will tell if head coach Gregg Marshall can bring the Shockers back to prominence and get Wichita State back to the Big Dance come March.

This is a hard one to call as both teams lost some scoring punch from last season. However, while Wichita State is at home, it’s hard for me to lay this many points with a Shockers team that I feel has lost more between the two sides. Omaha has had their issues, but this is still a Mavericks team that put 70+ up on the road against Minnesota, Colorado and Arizona State last season. I’ll take a shot with Omaha and the points in this one.