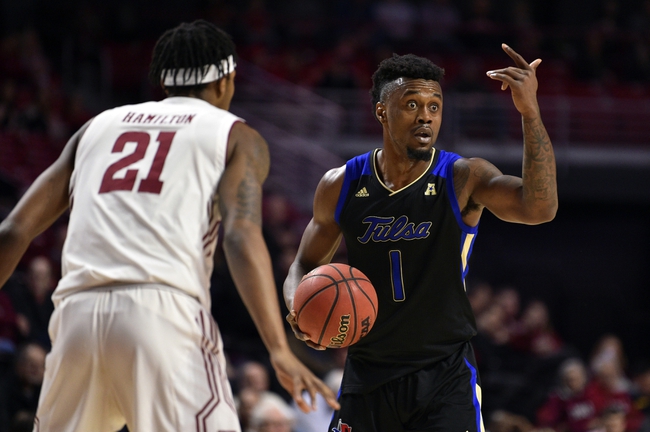 The Tulsa Golden Hurricane and the Houston Baptist Huskies meet in a college basketball matchup from the Reynolds Center on Tuesday afternoon.

The Tulsa Golden Hurricane will look to take a step forward this season after finishing the regular season with an overall mark of 18-14, including an 8-10 record in AAC conference play, tying for 7th. The Golden Hurricane were dropped by SMU in the opening round of the tournament, ending their season as the Golden Hurricane didn’t get any invitation for postseason basketball. Leading scorer DaQuan Jeffries is gone from the program having graduated, but Martins Igbanu returns after logging 12.5 points and a team-high 5.7 rebounds per game last season and Jeriah Horne is back as well as Tulsa’s 2nd returning double-digit scorer. Isaiah Hill also comes in as one of the most highly-touted recruits out of high school, logging 26 points per game while setting single-season and career scoring records at Liberty High School in Bakersfield, CA. Only time will tell if Tulsa can put all of their pieces together and turn into a dark horse in the AAC.

The Houston Baptist Huskies come into this season looking to make some noise in the Southland, doubling their win total from the year prior after finishing the 2018-19 season with an overall record of 12-18, including an 8-10 mark in Southland Conference play to sneak into the 8-team conference tournament as the #8 seed, where the Huskies were edged out by Lamar in a two point loss. Leading scorer Ian DuBose is back for the Huskies as a preseason all-conference selection following a 2018-19 season that saw him lead the Huskies with 17 points and 5.9 rebounds per game last season as a sophomore. Edward Hardt was the Huskies’ only other double-digit scorer last season, but being a senior, he’s gone from the program. Jalon Gates is also back and should see more playing time in his senior season after logging 8.8 points per game for HBU last year.

Early season spreads like these are hard to predict because guys are still getting their feet wet, perhaps with a new team, and at game speed sometimes it’s difficult. However, Tulsa schedules these kinds of games early on, and while the Golden Hurricane had a hiccup against California Baptist last season, Tulsa usually does a good job at dispatching these kinds of teams handily. Houston Baptist may be a team to watch in the Southland if they can get the right pieces around Ian DuBose, but I just think that Tulsa will want to get off to a good start at home, so I’ll lay the points with the Golden Hurricane in this one.

Get Premium Picks Start Winning Now »
The pick in this article is the opinion of the writer, not a PickDawgz site consensus.
Previous Pick
Baylor vs. Central Arkansas - 11/5/19 College Basketball Pick, Odds, and Prediction
Next Pick
Duquesne vs. Princeton - 11/5/19 College Basketball Pick, Odds, and Prediction