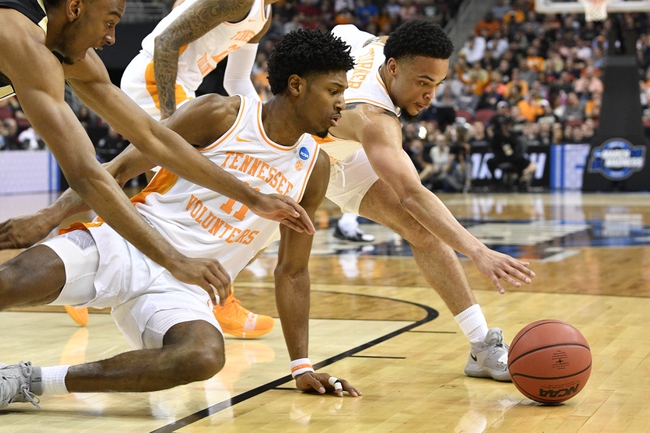 The UNC-Asheville Bulldogs and the Tennessee Volunteers meet in opening night college basketball action from Thompson-Boling Arena on Tuesday night.

The UNC-Asheville Bulldogs will look to start the season with a bang after finishing the 2018-19 season with an overall record of 4-27, including a 2-14 mark in Big South conference play to finish in 10th place. The Bulldogs’ stay in the conference tourney was short-lived, as the Bulldogs were bounced by Presbyterian in the opening round. UNC-Asheville will hope for some added development as their top five scorers last year were freshmen, including leading scorer and assist man Devon Baker, as well as Tajion Jones who was the only other double-digit scorer for UNC-Asheville last season. Coty Jude and L.J. Thorpe are back as well after logging 9.4 and 8.6 points per game against this season. As a team, UNC-Asheville averaged just 59.9 points per game on 40.3% shooting from the field, 32.5% from behind the arc and 74.1% from the foul line last season.

The Tennessee Volunteers will look to build on their success from the 2018-19 season after finishing the year with an overall record of 31-6, including 15-3 in SEC play to earn a share of the SEC regular season championship. The Volunteers ended up with the 2nd seed in the SEC tournament, defeating Mississippi State and Kentucky before losing to Auburn in the conference championship game. The Vols got an at-large bid to the NCAA tournament as a 2-seed there as well, defeating Colgate and Iowa before being upset by Purdue in the sweet 16. The top three scorers for the Vols all went pro, with Grant Williams, Admiral Schofield and Jordan Bone all being drafted. Lamonte Turner and Jordan Bowden will be tasked with leading the charge through the transition with Turner averaging 10.9 points and 3.8 assists per game and Bowden logging 10.6 points per game this season. Josiah James will also be tabbed to make an impact as one of the highest-ranked recruits for head coach Rick Barnes since joining Tennessee. James was the 22nd-ranked recruit and a five star recruit in multiple scout circles. Only time will tell is Tennessee can put the pieces together and make another run in the SEC this season.

UNC-Asheville was bad last season, but I’m chalking that up to it being a team full of freshmen. Tennessee is the more nameworthy team and bring some solid talent back from last season and are 10-0 SU all time against UNCA, but the last three meetings have been decided by no more than 7 points and all but one of the head-to-head meetings have been decided by more than 26 points. I know time and players on those teams change, but the Bulldogs have a history of keeping up with Tennessee and with this being opening night and guys trying to get back up to game speed, I could see the Bulldogs keeping this one close as well so I’ll take a shot at UNC-Asheville and the points in this one.