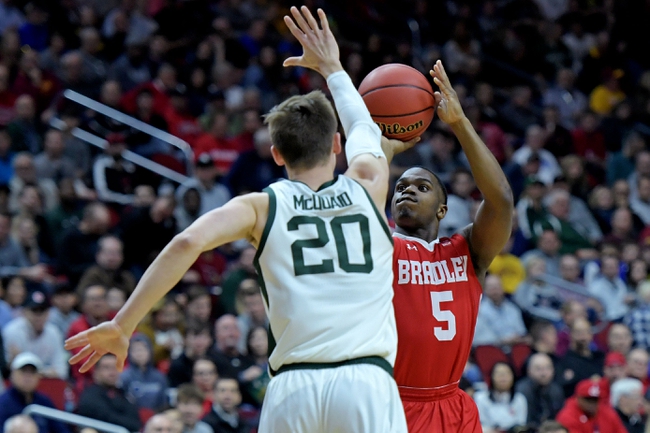 The Bradley Braves come into this season looking to build on what was a successful 2018-19 season, finishing the year with an overall record of 20-15, including a 9-9 mark in Missouri Valley conference play to finish in a tie for 5th place. The Braves ended up as the #5 seed, defeating Missouri State, Loyola-Chicago and Northern Iowa by a total of eight points in three games in three days to claim their 3rd conference title. The Braves ended up as the automatic bid from the Missouri Valley conference, earning a #15 seed where they were upended by Michigan State in the opening round. Six of Bradley’s top nine scorers from last season are back, including leading scorer Darrell Brown who logged 14.8 points per game while adding a team-high 3.2 assists and hitting 44.4% of his attempts from 3-point range last season. Elijah Childs is also back after registering 12.4 points and a team-high 7.8 rebounds per game and Koch Bar returns to bring some senior leadership down low as the Braves’ primary big man. It will be interesting to see if Bradley can bring back some of that magic to repeat as champions in the MVC this season as the pieces are all there.

The Saint Joseph’s Hawks will look for a bounce back season after a frustrating 2018-19 season, finishing the regular season with an overall mark of 14-19, including a 6-12 mark in A-10 conference play, giving the Hawks their 4th .500 or below season in the last 5 years. The Hawks finished in a tie for 10th place, getting the 10-seed in the A-10 tournament, losing in the quarterfinals to Davidson, thus ending their season. The Hawks fired then head-coach Phil Martelli, making this season the first season since 1995 where Martelli won’t be the head coach at Saint Joseph’s. Head coach Billy Lange has his work cut out for him early on, as all three of St. Joseph’s double-digit scorers from last season are gone. Charlie Brown, who led the team with 19 points and 6.2 rebounds per game went pro, while Jared Bynum and Lamarr Kimble both transferred. Taylor Funk comes back as the leading scorer from last year’s team after averaging 8.4 points and 5.5 rebounds per game last season. Sophomore Lorenzo Edwards and junior Anthony Longpre are also back to help maintain some semblance in Saint Joseph’s rotation going forward.

Getting the Hawks as a home dog on opening night would be worth a look, but there’s just too much gone from the Saint Joseph’s program right now to back them without seeing something first. Bradley brings back a ton of their scoring from the team that made it to the Big Dance last season and I think laying just a basket with the Braves given the amount of continuity they have coming into this season seems like a solid play. I’ll lay the bucket with the Braves on the road here.