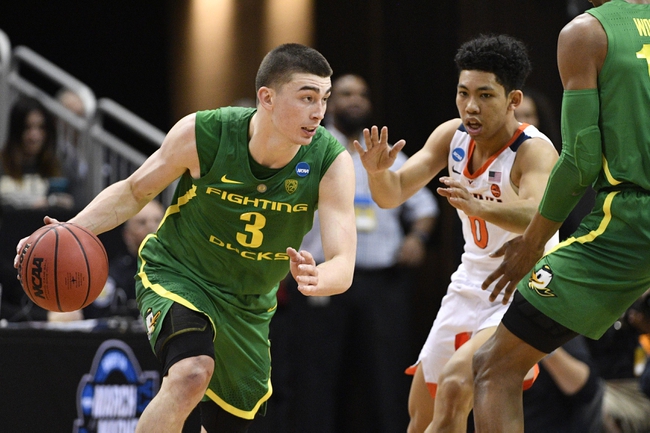 The Fresno State Bulldogs and the Oregon Ducks meet in opening night college basketball action from the Matthew Knight Arena on Tuesday night.

The Fresno State Bulldogs will hope to keep their play up after finishing the 2018-19 season with an overall record of 23-9, including a 13-5 mark in Mountain West play to finish in 3rd position. The Bulldogs defeated Air Force in the quarterfinals before losing out to eventual tournament winner Utah State in the semifinals. Despite their solid record and 23 wins, the Bulldogs didn’t participate in any postseason tournaments last season. The bad news for Fresno State is the team that launched a the most threes in the conference last season while making over 38% of them to finish top-25 in the country in 3-point shooting, lost their top two scorers in Braxton Huggins and Deshon Taylor who averaged 18.5 and 17.9 points per game respectively, with Taylor adding a team-high 5 assists per game last year. The plus side is that the Bulldogs retain the service of Nate Grimes who averaged nearly a double-double per game last season with 11.8 points and 9.2 rebounds per game and other key pieces like New Williams and Noah Blackwell will figure to be key pieces with increased roles in the offense this season.

The Oregon Ducks will look to build on a successful 2018-19 season, finishing the season with an overall record of 25-13, including a 10-8 mark in Pac-12 conference play, finishing tied for 4th in the conference ranks. The Ducks got the 6-seed in the Pac-12 tournament, defeating Washington State and then the top three seeds in Utah, Arizona State and Washington all in four days to pick up the program’s 5th conference tournament championship. The Ducks entered as a 12-seed, upsetting Wisconsin and taking down UC-Irvine before falling in the sweet 16 to eventual national champion Virginia.  The bad news for the Ducks is that a lot of the pieces from last year’s team are gone, with the likes of Paul White, Kenny Wooten, Vic Bailey Jr., Bol Bol and Louis King all either graduated or having entered the NBA draft. Payton Pritchard is back though after averaging 12.9 points and a team-high 4.6 assists per game last season. The Ducks made a huge dip in the transfer pool as well, bringing in Shakur Juiston from UNLV, Anthony Mathis from New Mexico, Eugene Omoruyi from Rutgers and Eric Williams Jr. from Duquesne. Juiston had his season shortened to just 8 games for UNLV last season but averaged 13.9 points and 9.7 rebound in 41 games across two seasons while Mathis is coming off of his best scoring season with New Mexico, averaging 14.7 points per game with a 41% clip from 3-point range. Omoruyi had a solid year for Rutgers, averaging a high of 14.7 points per game as well as 7.2 rebounds per game and Williams Jr. averaged 14.1 points in 64 games across two seasons for Duquesne. The pieces are there for head coach Dana Altman to put a decent team together for the Ducks this season, but only time will tell if everything can come together for Oregon over the course of the year.

The points with Fresno State are tempting, but despite Oregon having a ton of turnover from last season, the Ducks have brought in some strong pieces via the transfer with the likes of Shakur Juiston, Anthony Mathis, Eugene Omoruyi and Eric Williams Jr. all joining the fray. Quite frankly, I just don’t think Fresno State did enough in the offseason to counter what the Ducks are going to bring to the table, and there’s also the fact that Oregon has been money ATS dating back to last season. I’ll lay the points with Oregon in this spot.