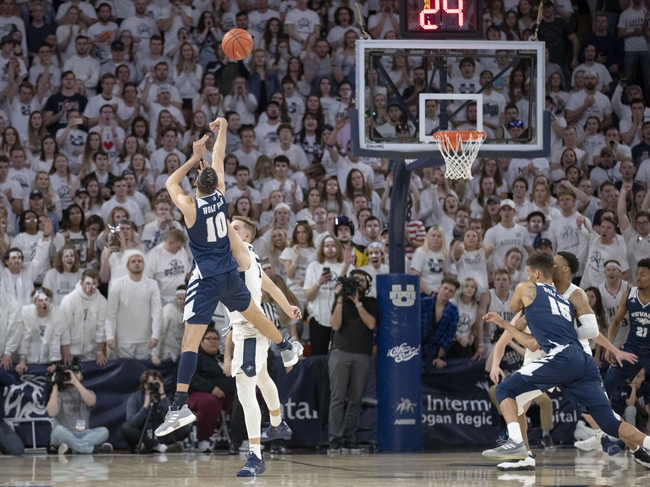 The Utah Utes and the Nevada Wolf Pack meet in opening night college basketball action from the Lawlor Events Center on Tuesday night.

The Utah Utes will look to rebound from a frustrating 2018-19 season that saw Utah finish with an overall record of 17-14, including an 11-7 mark in Pac-12 conference play to finish 3rd in what many considered a down year for the conference. Utah got a bye to the quarterfinals, but their stay in the tournament was short-lived as the Utes were up-ended by Oregon in the quarterfinals, thus ending their season. The Utes lost some talent with leading scorer Sedrick Barefield graduating and their top tow rebounders in Jayce Johnson and Donnie Tillman transferring out of the program. However, the good news is that the Utes return three sophomores with some serious game, including Timmy Allen who is Utah’s top returning scorer, averaging 12.2 points and 5.1 rebounds per game last season. Both Gach and Riley Battin are also back. Rylan Jones is expected to factor in at the point guard after logging 9.9 assists per game and 6.6 rebounds in his senior high school season while Matt Van Komen comes in at a gargantuan 7’4” who led his own team to a state title while blocking 5 shots per game and grabbing over 9 boards and logging 16 points per game. Only time will tell if all of the new pieces for Utah can fit together to make a run as a dark horse, or if this is going to be a retooling year for the Utes.

The Nevada Wolf Pack will be hoping to replicate some of their recent success, finishing the year with an overall record of 29-5, including a 15-3 mark in Mountain West conference play to finish as co-champions in the regular season. The Pack defeated Boise State in the quarterfinals before falling to San Diego State in the semifinals. Nevada then gained an at-large bid to the NCAA tournament, but the stay was short-lived as Nevada fell to Florida in the opening round. Eric Musselman resigned from his duties in Nevada to take over the helm at Arkansas, leaving Nevada to hire Steve Alford as their next head coach. The task is tall for coach Alford, as the entire starting lineup from last year’s team graduated and the Wolf Pack lost freshman Jordan Brown to Arizona. Lindsey Drew and Jazz Johnson will most likely be tabbed to take over the backcourt duties for Nevada as Drew comes in as a redshirt senior while Johnson ended last year as one of the nation’s most offensively efficient players. Jalen Harris will also be asked to take on large duties as the former Louisiana Tech transfer could end up being Nevada’s top scorer. It will be interesting to see how Nevada deals with the boatload of transition while trying to maintain the lofty expectations even in a retooling year.

I get Nevada being favored on opening night because they’re at home and that could make the difference between two teams going through some major transitions right now. However, the Wolf Pack weren’t great against the number to end last season, and that was with a star-studded starting five. Nevada is also going with basically a completely new team heading into this season. Utah lost a lot as well, but at least they’re bringing back three key cogs in last year’s rotation, and we know more about Utah than we do Nevada right now. I’ll take a shot with Utah and the points until I see reason to start trusting Nevada.