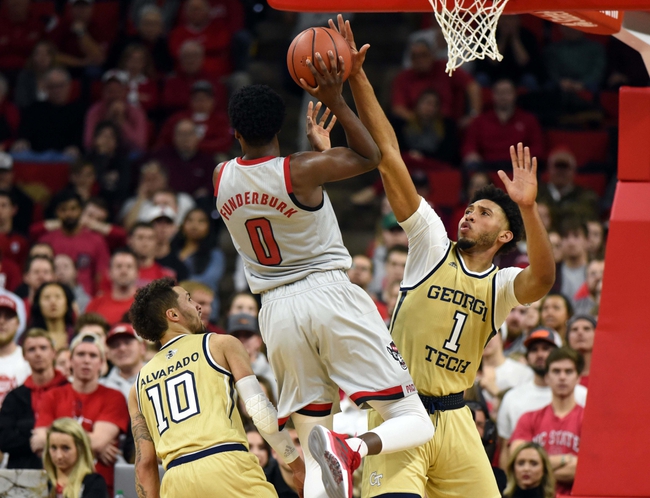 The Georgia Tech Yellow Jackets and the NC State Wolfpack meet in an early ACC conference matchup in opening night college basketball action from the PNC Arena on Tuesday night.

The Georgia Tech Yellow Jackets come into the 2019-20 season looking to build some positive vibes after finishing the 2018-19 season with a 14-18 overall record, including 6-12 in ACC conference play to finish in 10th. The Yellow Jackets ended up losing in the first round of the conference tourney to Notre Dame, effectively ending their season without an invite to a postseason tournament. That was the last chance that Georgia Tech would have at the postseason for at least a year after NCAA sanctions were handed down against the Yellow Jackets, banning Georgia Tech from postseason play for one year as well as losing a scholarship for each of the next four seasons. The good news for Georgia Tech is that they bring back their top four scorers from last season, including leading scorer and assist man Jose Alvarado, who averaged 12.5 points and 3.4 assists per game while also returning James Banks III who logged 10.5 points and a team-high 7.7 rebounds per game. Michael Devoe and Moses Wright are also back while the Yellow Jackets also bring in VMI transfer Bubba Parham who averaged 21.4 points and 3.5 assists per game while shooting 42.5% from the field and just under 40% from 3-point range last season. As a team, Georgia Tech averaged 65.3 points per game on 44% shooting from the field, 30.7% from behind the arc and 68.9% from the foul line last season.

The NC State Wolfpack will look to build on a decent 2018-19 season that saw the Wolfpack finish with an overall record of 24-12, including a 9-9 mark in ACC conference play to finish tied for 8th place. The Wolfpack scraped by Clemson in their opening game before falling to Virginia in the quarterfinals. NC State received an invite to the NIT, where the Wolfpack defeated Hofstra and Harvard before losing to Lipscomb in the quarterfinals. The bad news for NC State is that they lose leading scorer and rebounder Torin Dorn, who led NC State with 14 points and 7.2 rebounds per game last season. The good news is that their other two double-digit scorers return in Markell Johnson who had 12.6 points per game and a team-high 4.2 assists per game and C.J. Bryce who had 11.6 points and 4.6 rebounds per game. The Wolfpack also retain the likes of Devon Daniels, DJ Funderburk and Braxton Beverly while also adding Nebraska transfer Thomas Allen to the mix after logging 8.7 points per game in 30.2 minutes per game on 43.6% shooting with the Cornhuskers last season. Only time will tell if NC State can keep the progress going in Kevin Keatts’ 3rd year in charge of the NC State program. As a team, NC State is averaging 80.1 points per game on 45.8% shooting from the field, 35.2% from behind the arc and 70.8% from the foul line last season.

Georgia Tech has had a lot of success in this matchup, so the points are worth a look considering that the Yellow Jackets bring back a ton of last year’s team that accounts for almost 75% of their scoring and the addition of Bubba Parham can only help. However, NC State is bringing back a lot of talent of their own, and you have to wonder how much these guys will be able to get up even in the early going knowing that they’re just playing for pride this season with no tournament prospects at the end of the year. I think NC State has a chip on their shoulders after not getting an at-large bid despite winning 24 games last season, and I think that revenge tour starts with a win and cover at home in this one.