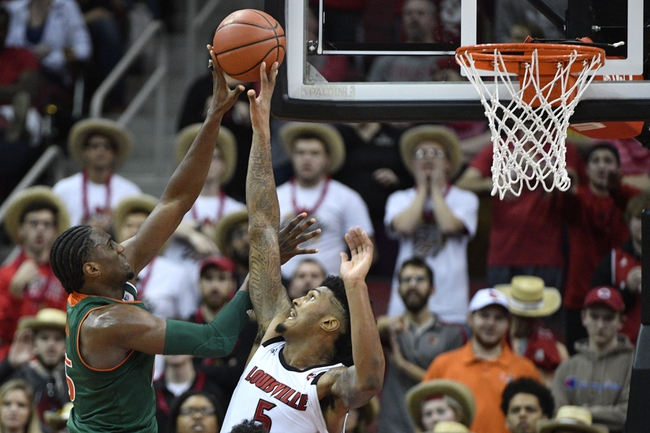 The Louisville Cardinals and the Miami Hurricanes meet in an early ACC conference college basketball tilt from the Watsco Center on Tuesday night.

The Louisville Cardinals come into this season looking to build on a decent 2018-19 campaign that saw the Cardinals finish with a record of 20-14, including 9-9 in ACC conference play, finishing in a tie for 6th. The Cardinals defeated Notre Dame before falling to North Carolina in the quarterfinals of the ACC tournament, receiving an invite to the Big Dance as a #7 seed with the at-large bid. The Cardinals’ stay in the tournament was short-lived, as Louisville lost to Minnesota in their opening round game. The Cardinals lose the services of some key pieces like Christen Cunningham, V.J. King and Khwan Fore, but bring back leading scorer Jordan Nwora who averaged team-highs of 17.6 points and 7.6 rebounds per game. Nwora enters the season as the preseason ACC player of the year, after finishing as a third-team all-ACC pick last year and the most improved player in the ACC from a year ago. Lamarr Kimble transfers into the Cardinals’ backcourt after graduating from St. Joseph’s. Kimble, a three-year captain for the Hawks, averaged 15.6 points per game last season. Dwayne Sutton will also be called upon to anchor the Louisville starting five after averaging 10 points per game and leading the Cardinals in scoring on five separate occasions last season. As a team, Louisville averaged 74.6 points per game on 43.4% shooting from the field, 34.2% from behind the 3-point line and 77.7% from the foul line last season.

The Miami Hurricanes will hope to rebound from a disappointing 2018-19 season that saw the ‘Canes finish with an overall record of 14-18, their worst since 2006-07, including a 5-13 mark in ACC play to finish in a tie for 11th place in the conference. The Hurricanes defeated Virginia Tech in the opening round of the conference tournament before losing to Virginia Tech, ending Miami’s hopes of a postseason invite. The Hurricanes lose three double-digit scorers from last season as Zach Johnson, Anthony Lawrence Jr. and Ebuka Izundu all graduated from the program. The good news is that leading scorer Chris Lykes is back after averaging 16.2 points per game while also bringing back DJ Vasiljevic who averaged 11.8 points per game while shooting just under 37% from 3-point range last season. The Hurricanes will also bring in Kameron McGusty, as the former Oklahoma Sooner will finally get to suit up after having to sit out last season due to transfer eligibility issues. McGusty will bring some size and shooting prowess to the backcourt after shooting 40% from behind the arc in conference play in his last go around with Oklahoma. As a team, Miami averaged 71.8 points per game on 43.5% shooting from the field, 33.3% from behind the arc and 73.5% from the foul line last season.

The points are tempting with Miami at home as three of the last 5 meetings have been decided by 5 points or less. However, even with the loss, the addition of Kimble to Louisville makes the Cardinals the owners of a scary backcourt in the early going. Miami has some soiid firepower of their own with McGusty joining the fray, but I just think Louisville is easier to trust in the early going and should be able to eke out a cover late.

Get Premium Picks Start Winning Now »
The pick in this article is the opinion of the writer, not a PickDawgz site consensus.
Previous Pick
Duquesne vs. Princeton - 11/5/19 College Basketball Pick, Odds, and Prediction
Next Pick
Morehead State vs. Samford - 11/5/19 College Basketball Pick, Odds, and Prediction