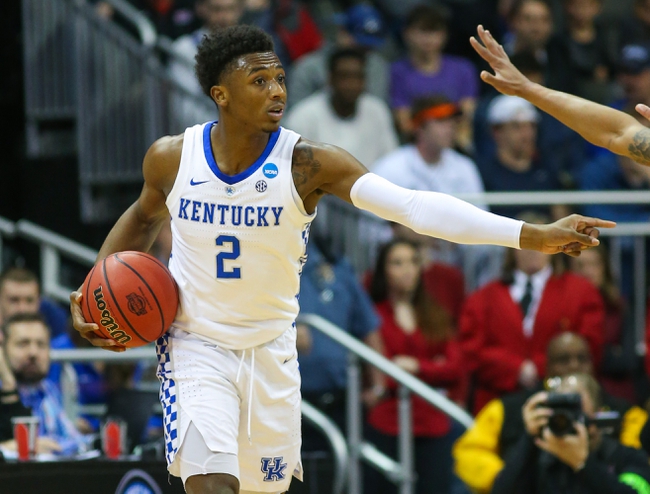 The Michigan State Spartans are coming off a 32-win season that ended in the Final Four. Cassius Winston returns after averaging 18.8 points and 7.5 assists while Joshua Langford is back after averaging 15 points and 3.6 rebounds. Xavier Tillman returns as a third double-digit scorer and Aaron Henry averaged 22 minutes per game last season. The Michigan State Spartans return three of their top-four scorers from a team that was one win away from playing for the national title, so it’s easy to see why they’re considered a favorite to cut down the nets this season. MSU also has a pair of freshmen in Malik Hall and Mark Watts who will add depth to this roster immediately. The Michigan State Spartans have won nine of their last 11 non-home games.

The Kentucky Wildcats won 30 games last season that ended in the Eight Eight. Ashton Hagans returns after averaging 7.7 points and 4.3 assists while Immanuel Quickley averaged 5.2 points and 1.8 rebounds. Nick Richards plays in 12.1 minutes per game last season and EJ Montgomery averaged 4.1 rebounds in limited time. The Kentucky Wildcats will once again be a brand new roster for the most part, but freshmen Tyrese Maxey, Dontaie Allen, Keion Brooks, Johnny Juzang and Keion Brooks are here to save the day and keep Big Blue with some of the best future odds. A lack of experience is always an issue for Kentucky, but few teams in the country can hang talent wise. It’s just a matter of when everything comes together. The Kentucky Wildcats have won 11 of their last 14 non-home games.

The Michigan State Spartans have a good portion of the roster that made the Final Four last season and even with Langford beginning the season on the injured list, the Spartans still open the season as the top ranked team. The Kentucky Wildcats talent speaks for itself, but the inexperience is often an issue early in the year when playing top level competition, and we've seen UK get waxed the last two years in these big opening matchups. Early in the season when we're still feeling teams out, I trust returning production and experience over kids fresh out of high school with no knowledge of how they'll handle the pressure of the college game. I'll lay the bucket with Sparty.

Get Premium Picks Start Winning Now »
The pick in this article is the opinion of the writer, not a PickDawgz site consensus.
Previous Pick
Wyoming vs. Idaho State - 11/5/19 College Basketball Pick, Odds, and Prediction
Next Pick
California vs. Pepperdine - 11/5/19 College Basketball Pick, Odds, and Prediction