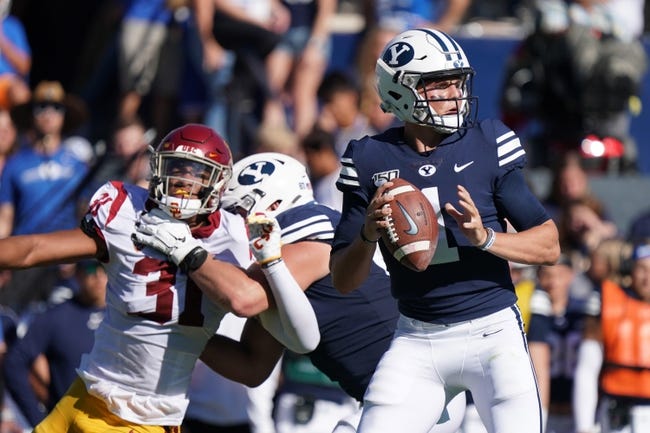 The BYU Cougars tangle with the USC Trojans at Los Angeles Memorial Coliseum in Los Angeles, California. The Cougars enter this game at 9-2 while the Trojans come in at 4-6.

The Cougars come in off of a 34-17 road win over Georgia Southern, which gave them their 4th win in a row. Jaren Hall went 17-of-29 for 312 yards with a pair of touchdowns through the air as well as five rushes for 21 yards (4.2 yards per carry). If he can figure out how to keep his incredible play up, it will do wonders for the Cougars.

Junior quarterback Jaren Hall is 12th in the nation with a 78.8 QBR while completing 64 percent of his passes for 2,307 yards with 18 passing touchdowns to three interceptions He has  53 rushing attempts for 281 yards with three rushing touchdowns. BYU ranks 42nd in that department and they ran for 195 yards in the win over Georgia Southern. BYU is giving up just 23.6 points per game, which is 47th in the nation.

The BYU Cougars have been a solid defensive team thus far as they are giving up 23.6 points per game. In their previous game against the Georgia Southern Eagles, they allowed 17 points on 268 total yards of offense (122 passing, 146 rushing). The Eagles were able to run the football well as they averaged 3.9 yards per rush. BYU was also able to force a pair of turnovers (both interceptions) so their secondary defended well.

In their previous game against the UCLA Bruins, they gave up 62 points on 609 total yards of offense.

Freshman quarterback Jaxson Dart has been doing pretty well as the backup for the USC Trojans thus far. This season, he has a 62.5 QBR while completing 60.2 percent of his passes for 914 yards with seven touchdowns to five interceptions and 15 carries for 23 yards and a single rushing touchdown.

The USC Trojans have been struggling a bit on the defensive side of the field as they are allowing 32.2 points per game.

Although the Cougars are 1-4 ATS in their last 5 games as a road favorite and are 1-4-1 ATS vs. a team with a losing record.

I like the Cougars to come out and win this one to go against the trends as they end the season. The Trojans are just that stale offensively to keep it close.