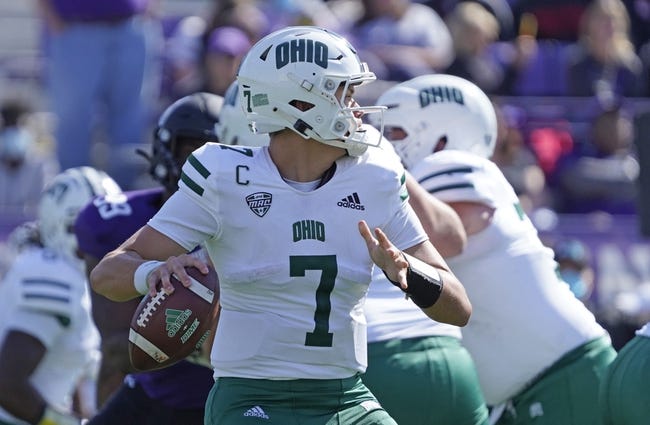 The Ohio Bobcats will travel to Doyt L. Perry Stadium to take on the season Bowling Green Falcons this Friday afternoon in College Football action.

The Ohio Bobcats had their 2-game winning streak snapped and dropped to 3-8 on the season after being defeated by the Toledo Rockets, 35-23, on November 16th. Ohio had trouble slowing down the Toledo rushing attack and could not fight back after a 55-yard TD run by the Rockets Bryant Koback gave Toledo a 21-9 lead with 4:27 left in the 3rd quarter. Ohio outgained Toledo by a 445-401 margin, however, lost the turnover battle by a 1-0 margin in the loss. Leading the way for the Bobcats was QB Kurtis Rourke who completed 22 of 36 passes for 233 yards & 1 TD.

The Bowling Green Falcons lost their 2nd straight game and dropped to 3-8 on the season after being defeated by the Miami (OH) RedHawks, 49-17, on November 16th. Bowling Green got off to a quick 7-0 lead on a 62-yard TD run by Terion Stewart, however, the offense could get nothing else going for the rest of the game and could not fight back after the RedHawks went into halftime with a 20-7 lead. Bowling Green was outgained by Miami (OH) by a 346-258 margin and committed 1 turnover in the loss. Leading the way for the Falcons was Terion Stewart who had 71 rushing yards & 1 TD on 7 carries.

Both teams have struggled this season, however, despite their recent loss at Toledo, there is no question that Ohio has been playing better football as of late which includes recent victories against Miami (OH) at home and Eastern Michigan on the road. Bowling Green has lost 6 of their last 7 games and have really struggled defensively, this season as they come into this game ranked just 106th in scoring defense. Bowling Green gives up points, however, their offense has also struggled as of late, being held to just an average of 10.5 ppg over their last two games and as I think Ohio is going to be able to put up plenty of points in this one, I think their defense does enough to get them a cover here. Good Luck!