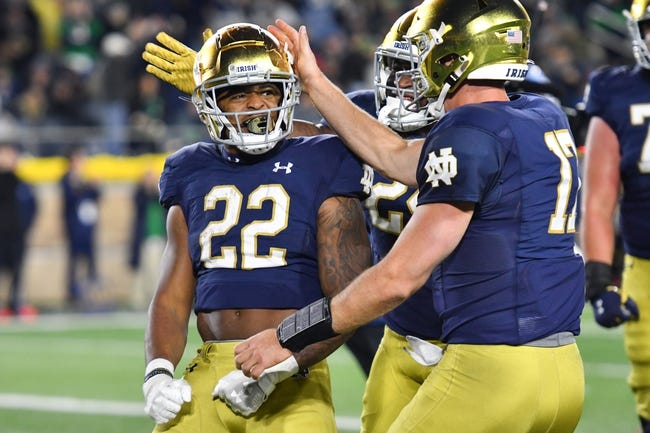 The Navy Midshipmen and Notre Dame Fighting Irish face off on Saturday in a non-conference college football showdown at Notre Dame Stadium. When these two teams faced off in 2019, Notre Dame came away with the 52-20 victory.

The Navy Midshipmen come into this game with a 2-6 record overall but the last two games they have looked much improved. Two games ago against Cincinnati, Navy was competitive but lost by seven points. In the last game against Tulsa, Navy scored ten points, and that was enough to come away with the 20-17 victory. Navy is averaging 18.1 points while the defense is giving up 30 points per game. This is a run first team and Isaac Ruoss has been the top rusher sitting with 437 yards and two touchdowns.

On the other side of this matchup is the Notre Dame Fighting Irish who sit with a 7-1 record and they have gone 5-3 against the spread. In the last game against North Carolina, Notre Dame’s offense was strong, scoring 44 points. Notre Dame is averaging 32.6 points while the defense is giving up 24.5 points per game. Under center for Notre Dame is Jack Coan and he has thrown for 1,610 yards, 12 touchdowns, and four interceptions. In this game Notre Dame is going to need the defense to be good against the run, and not let this get into a shootout.