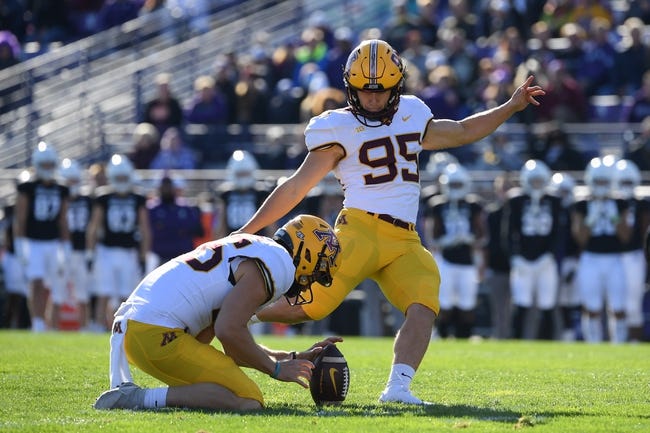 The Illinois Fighting Illini and Minnesota Golden Gophers face off on Saturday in a Big 12 college football showdown at TCF Bank Stadium. When these two teams faced off in 2020, Minnesota came away with the 41-14.

Illinois have had some major struggles this season and they currently sit with a 3-6 record overall. Two games ago against Penn State, Illinois pulled the big upset, but in the last game against Rutgers they lost 20-14. Illinois is averaging 17.6 points while the defense is giving up 23.3 points per game. Illinois has dealt with injuries to the quarterback but right now it appears that it’s Brandon Peters' team. In the last game Peters threw for 190 yards and two touchdowns. Peters has thrown for 600 yards, three touchdowns, and one interception. The top running back has been Chase Brown and he has rushed for 704 yards and four touchdowns.

On the other side of this matchup is Minnesota who sit with a 6-2 record overall ahd they have won four games in a row. Two games ago against Maryland they won 34-16 and in the last game against Northwestern, they won 41-14. Minnesota is averaging 28.4 points while the defense is giving up 18.9 points per game. One big issue for Minnesota is they have all kinds of injuries at running back. Mar’keise Irving and Ky Thomas were the 5th and 6th running backs on the roster heading into the season, but they are now a 1-2 punch. In the last game Irving rushed for 110 yards and two touchdowns, and Thomas had 106 yards.

Minnesota has been dominating and that won’t be changing in this game. Illinois offense has struggled as of late, and their lack of scoring is going to be the difference as they are blown out. Back Minnesota against the spread. In terms of the total, I like the under to cash.