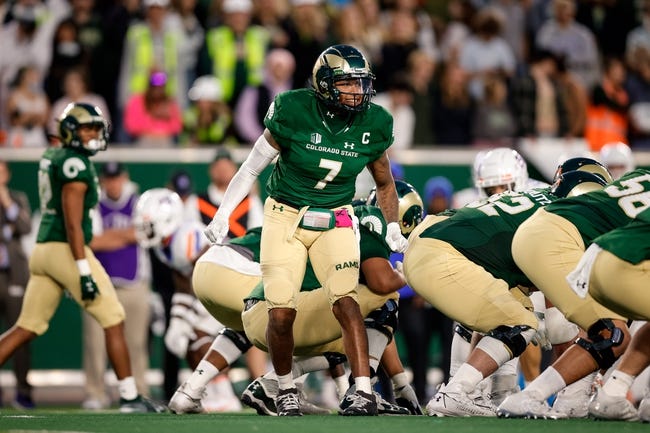 The Colorado State Rams will travel to Jonah Field at War Memorial Stadium to take on the Wyoming Cowboys this Saturday afternoon in College Football action.

The Colorado State Rams lost their 2nd straight game and dropped to 3-5 on the season after being defeated by the Boise State Broncos, 28-19, this past Saturday. Colorado State led by a 16-7 margin going into halftime, however, the Rams struggled defensively in the 2nd half and could not fight back after a 11-yard TD reception by the Broncos Stefan Cobbs gave Boise State a 21-16 lead with 4:01 left in the 3rd quarter. Colorado State was outgained by Boise State by a 430-381 margin and didn’t force a turnover in the loss. Leading the way for the Rams was TE Trey McBride who had 10 receptions for 103 yards.

The Wyoming Cowboys lost their 4th straight game and dropped to 4-4 on the season after being defeated by the San Jose State Spartans, 27-21, this past Saturday. Wyoming struggled with turnovers in this one and could not fight back after a 44-yard TD reception by the Spartans Charles Ross gave San Jose State a 27-14 lead with 2:59 left in the 3rd quarter. Wyoming outgained San Jose State by a 400-388 margin, however, lost the turnover battle by a 2-0 margin in the loss. Leading the way for the Cowboys was WR Isaiah Neyor who had 3 receptions for 72 yards & 2 TD.

Colorado State might have a worse record than Wyoming, however, I love the Rams in this one. Wyoming has been awful on the offensive end as of late, averaging just 9.5 ppg during their 4-game losing streak and recently loss to New Mexico in their last home game by a 14-3 margin. Colorado State has a solid defense that ranks 18th in rushing defense that should be able to slow down Wyoming’s biggest weapon in Xazavian Valladay and as I think the trio of Todd Centeio, David Bailey, & Trey McBride will have some success on the offensive end in this one, I’m taking Colorado State to cover this small road spread. Good Luck!