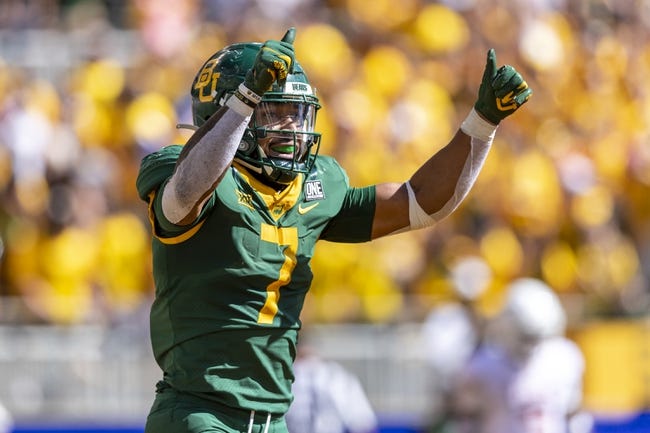 The 12th ranked Baylor Bears will travel to Amon G. Carter Stadium to take on the TCU Horned Frogs this Saturday afternoon in College Football action.

The 12th ranked Baylor Bears won their 3rd straight game and improved to 7-1 on the season after defeating the Texas Longhorns, 31-24, this past Saturday. Baylor trailed by a 21-10 margin early in the 3rd quarter, however, the Baylor offense was outstanding down the stretch and was able to pull away after a 32-yard TD run by Abram Smith gave the Bears a double-digit lead with 7:59 left in the 4th quarter. Baylor outgained Texas by a 427-382 margin and forced 2 turnovers in the victory. Leading the way for the Bears was RB Abram Smith who had 145 rushing yards & 1 TD on 21 carries.

The TCU Horned Frogs lost their 3rd straight game and dropped to 3-5 on the season after being defeated by the Kansas State Wildcats, 31-12, this past Saturday. TCU struggled on both ends of the field against Kansas State and could not fight back after going into halftime trailing by a 21-5 margin. TCU was outgained by Kansas State by a 388-340 margin and lost the turnover battle by a 2-1 margin in the loss. Leading the way for the Horned Frogs was RB Kendre Miller who had 102 rushing yards on 14 carries.

TCU is a team that is just in shambles at the moment, highlighted by the firing of long-time coach, Gary Patterson, and it’s hard to imagine the Horned Frogs coming out strong in what is a touch matchup with Baylor who has been outstanding on both sides of the ball this season. TCU has had no answers defensively this season as they currently rank 104th in scoring defense and as I think Baylor defense will have no problems taking care of business with a TCU offense missing one of their best weapons in Zach Evans, I think Baylor has no trouble covering this small road spread. Good Luck!