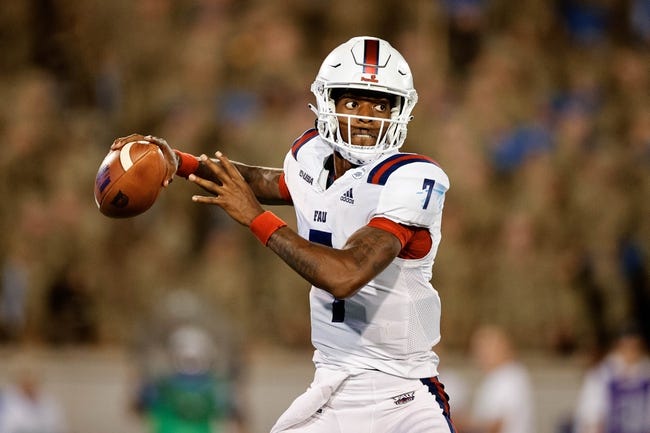 The UTEP Miners will travel to FAU Stadium to take on the Florida Atlantic Owls this Saturday night in College Football action.

The UTEP Miners won their 4th straight game and improved to 6-1 on the season after defeating the Louisiana Tech Bulldogs, 19-3, on October 16th. UTEP was outstanding on the defensive end against Louisiana Tech and had no trouble securing the victory after going into halftime with a 16-3 lead. UTEP lost the turnover battle by a 4-3 margin, however, did outgain Louisiana Tech by a 385-278 margin. Leading the way for the Miners was WR Jacob Cowing who had 9 receptions for 166 yards.

The Florida Atlantic Owls improved to 4-3 on the season after defeating the Charlotte 49ers, 38-9, on October 21st. Florida Atlantic trailed by a 9-7 margin going into halftime, however, the Owls dominated the 49ers on both ends of the field throughout the 2nd half and had no trouble securing the victory after a 30-yard TD reception by Brandon Robinson gave Florida Atlantic a 28-9 lead with 1:06 left in the 3rd quarter. Florida Atlantic outgained Charlotte by a 427-351 margin while also winning the turnover battle by a 3-1 margin in the victory. Leading the way for the Owls was QB N’Kosi Perry who completed 9 of 11 passes for 225 yards & 3 TD.

UTEP has been much better than expected this season, however, this is still a team that really hasn’t played much in terms of competition and lost to Boise State by a 54-13 margin earlier this season. Florida Atlantic is better than their record indicates and was impressive on both sides of the ball in their 29-point victory against Charlotte and as I think the Owls defense is going to give UTEP a bunch of issues, I think N’Kosi Perry and the Florida Atlantic do enough offensively to cover this double-digit spread. Good Luck!