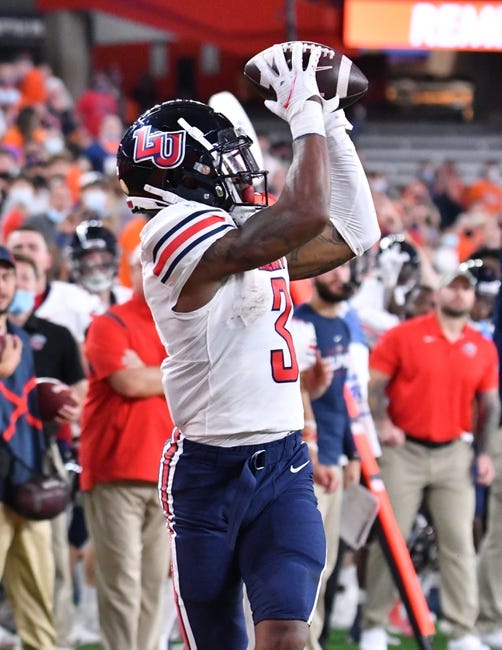 The Liberty Flames will play host to the UMass Minutemen on Saturday from Williams Stadium. These two teams are having opposite years as Liberty is 6-2 and UMass is 1-6.

This UMass team struggles to score the ball putting up less than 14 points in all of their losses this season. The QB situation has been inconsistent and the only bright spot for this team has been on the ground. In their lone win of the season against UConn, running back Ellis Merriweather led the team in rushing with 172 total yards. These losses have given them large spreads, and this is where they’ve seen success. UMass is 5-0 ATS in their last 5 games after allowing less than 170 yards passing in their previous game and 5-2 ATS in their last 7 games after allowing more than 200 yards rushing in their previous game.

Liberty has looked great this season behind potential first round pick Malik Willis. Willis has completed 66.1% of passes with an 82.7 QBR. This, along with 184 rushing yards per game, explains why Liberty is ranked 28th in scoring. Unfortunately, Willis is listed as questionable after he exited early against North Texas last time out with a left foot injury. The Flames won that game against North Texas but did not cover as a 21-point favorite.

This is an extremely lopsided match up as last season the Minutemen laid an egg finishing the game with 0 points to Liberty’s 45. There’s no doubt that Liberty gets the win here. The Flames rely way too much on their top QB and regardless of if he plays or not, he’s clearly not 100%. It’s also important to note how important foot injuries are to passers. Throwing is more than just arm strength as power comes from the bottom up. I think 36 points is too many as this line is high from last year's blowout.