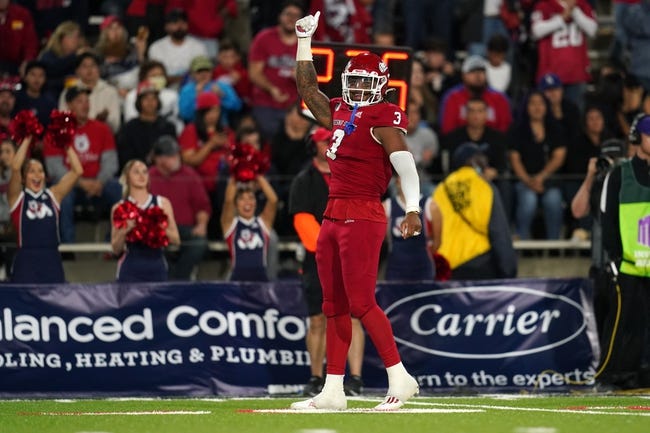 On Saturday night, the Fresno State Bulldogs will be on the road to face the San Diego State Aztecs Saturday night in this Mountain West contest.

San Diego is coming off of a win against Air Force where they were 5 point underdogs. They scrapped out of that one with a 2 point victory which now has this Aztec team at 7-0 on the season. This Aztecs team has done it all on the ground as they have a 26th ranked rush and a 126th ranked passing game. That tells you all you need to know about this team on offense, but the main stake of this team has been their defense. They rank 7th in the nation in points allowed giving up an average of 15.7 points per game.

Fresno has an opposite offensive game plan in comparison to San Diego. The Bulldogs are 9th in the nation in passing, averaging 341 yards per contest while they are 88th in rushing offense. QB, Jake Haener has 2,582 yards with 22 touchdowns on the year. I doubt he’ll be able to have the same success against this Aztec defense that doesn’t give points away.

The Aztecs will lose eventually, I just don't think Fresno is the team that’s going to beat them. Fresno is 1-5 ATS in their last 6 conference games while the Aztecs have just been red hot this season. I tried my best to overthink this one, but it's simple, Aztecs win the ML for their 8th win in a row.