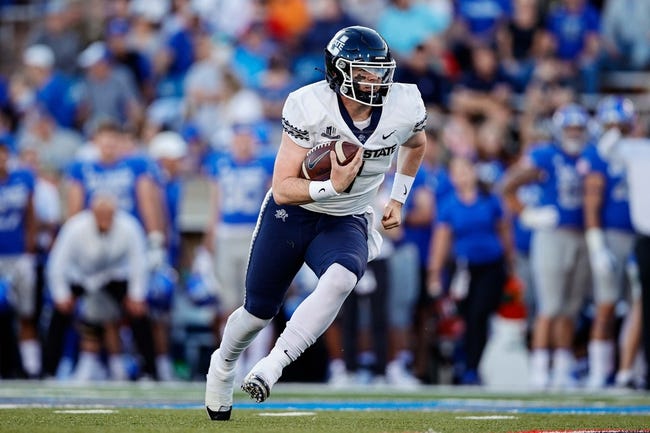 The Utah State Aggies and UNLV Rebels face off on Saturday in a Mountain West college football showdown at Allegiant Stadium. When these two teams faced off in October of 2018, Utah State won 59-18.

Utah State comes into this game with a 3-2 record overall but they have lost two games in a row. Two games ago against Boise State they lost 27-3 and in the last game against BYU they lost 34-20. The defense hasn’t been as good the last few games, and they need that to be better in this game.Utah State is averaging 29.2 points while the defense is giving up 30.6 points per game. Under center for the Aggies is Logan Bonner and he has thrown for 1,235 yards, nine touchdowns, and six interceptions. Calvin Tyler Jr has rushed for 417 yards and four touchdowns.

On the other side of this matchup is the UNLV Rebels who are still looking for their first win of the season. In the last game against UTSA, UNLV was competitive but they couldn’t make the comeback late as they lost 24-17. UNLV is averaging 18.6 points while the defense is giving up 36.4 points per game. Under center for the Rebels is Cameron Friel and in the last game he threw for 307 yards, one touchdowns, and two interceptions. Running back Charles Williams has rushed 94 times for 404 yards and three touchdowns. If UNLV wants any chance in this game, the defense is going to need to be a lot better.