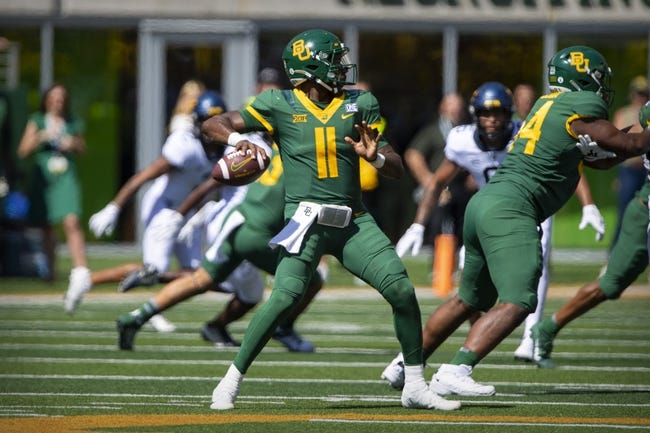 The BYU Cougars and Baylor Bears face off on Saturday in a non-conference showdown at McLane Stadium. The last time these two teams faced off was in 1984 and BYU won 47-13.

The BYU Cougars come into this game with a 5-1 record overall, but they are coming off a loss in their last game against Boise State. The offense could only manage 17 points, and that led to the nine point defeat. BYU only scored in the first quarter and the 4th quarter, and that wasn’t enough. BYU is averaging 27.1 points while the defense is giving up 20.5 points per game. Under center for BYU is Jaren Hall and on the season he has thrown for 863 yards, eight touchdowns, and three interceptions. The best back has been Tyler Allgeier who has thrown for 642 yards and eight touchdowns. If BYU wants to win this game, the Cougars need the offense to be better.

On the other side of this matchup is the Baylor Bears who also sit with a 5-1 record and their only loss came two games ago against Oklahoma State 24-14. Baylor bounced back in a big way in the last game against West VIrginia winning 45-20. Baylor for the most part has had a strong offense averaging 38.3 points per game. The defense has also been quite impressive, giving up only 17.8 points per game. Under center for Baylor is Gerry Bohanon and he has thrown for 1,332 yards, 11 touchdowns, and zero interceptions. In this game, if Baylor can make it a shootout, they will be in good shape to come away with the victory.

BYU didn’t look good in the last game and I don’t think their offense is going to be much better in this game. I expect another big game from Bohanon and Baylor’s offense will score at least 31 points. The 31 points will be enough for Baylor to win this game and cover the spread.