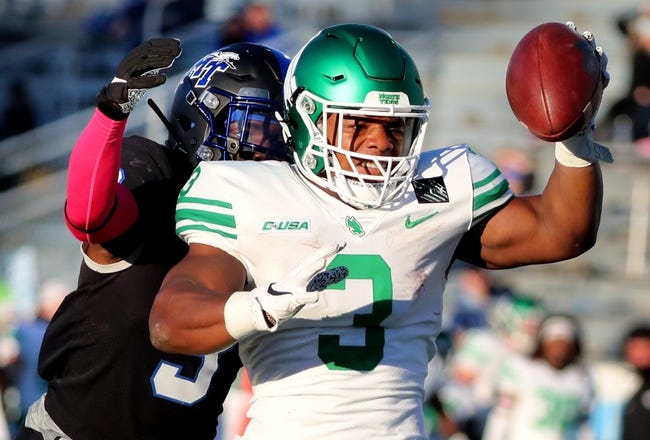 The Marshall Thundering Herd will travel to Apogee Stadium to take on the North Texas Mean Green this Friday night in College Football action.

The Marshall Thundering Herd snapped a 3-game losing streak and improved to 3-3 on the season after defeating the Old Dominion Monarchs, 20-13 in OT, this past Saturday. Marshall had a surprisingly difficult time as double-digit favorites against Old Dominion, however, avoided the upset after forcing OT with a 52-yard TD reception with just :33 seconds left and winning it in OT on a 22-yd TD reception by Shadeed Ahmed. Marshall outgained Old Dominion by a 390-314 margin, however, did commit two turnovers in the victory. Leading the way for the Thundering Herd was QB Grant Wells who has completed 30 of 46 passes for 299 yards, 2 TD, & 2 INT.

The North Texas Mean Green lost their 4th straight game and dropped to 1-4 on the season after being defeated by the Missouri Tigers, 48-35, this past Saturday. North Texas struggled with turnovers and could not fight back after going into halftime trailing by a 31-7 margin. North Texas outgained Missouri by a 493-474 margin, however, lost the turnover battle by a 4-0 margin. Leading the way for the Mean Green was QB Austin Aune who completed 16 of 26 passes for 305 yards, 4 TD, & 2 INT.

Marshall has some talent on the offensive end, however, the Thundering Herd just haven’t looked great over the last month and it’s not that encouraging that they barley pulled off a victory at home against a very below average Old Dominion team. North Texas isn’t as dangerous as we’ve seen in year’s past, however, the offensive was impressive last week against Missouri and seems to be heading in the right direction. Marshall has really struggled against the run this season which should lead to a big game by the Mean Green’s biggest weapon in DeAndre Torrey and as I think this is just too many points for Marshall to cover on the road, I’m taking North Texas and the double-digit points. Good Luck!