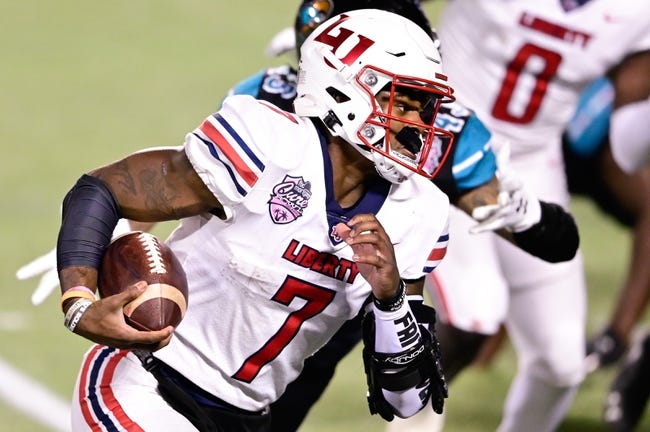 The Middle Tennessee Blue Raiders will travel to Williams Stadium (VA) to take on the Liberty Flames this Saturday afternoon in College Football action.

The Middle Tennessee Blue Raiders snapped their 3-game losing streak and improved to 2-3 on the season after defeating the Marshall Thundering Herd, 34-28, this past Saturday. Middle Tennessee was outstanding on the offensive end in the 1st half against Marshall and was able to hold on late for the victory after taking a 28-7 lead with 5:52 left in the 2nd quarter. Middle Tennessee was outgained by Marshall by a 493-314 margin, however, forced 6 turnovers in the victory. Leading the way for the Blue Raiders was RB Chaton Mobley who had 132 rushing yards & 1 TD on 15 carries.

The Liberty Flames improved to 4-1 on the season after defeating the UAB Blazers, 36-12, this past Saturday. Liberty was outstanding offensively against UAB and had no trouble securing the victory after going into the 4th quarter with a 24-3 lead. Liberty outgained UAB by a 544-325 margin and forced 1 turnover in the victory. Leading the way for the Flames was QB Malik Willis who completed 13 of 19 passes for 287 yards & 1 TD while also rushing for 144 yards & 2 TD’s.

Liberty bounced back from their loss at Syracuse with an impressive victory over UAB and I’m expecting a similar result in this one against a Middle Tennessee team that is 0-3 on the road this season. Liberty has one of the better defenses in all of College Football as they come into this game ranked 9th in scoring defense & 5th in total defense and as I think Malik Willis will have plenty of success offensively in this one, I think Liberty wins this one by at least 3 TD’s and covers this large home spread. Good Luck!