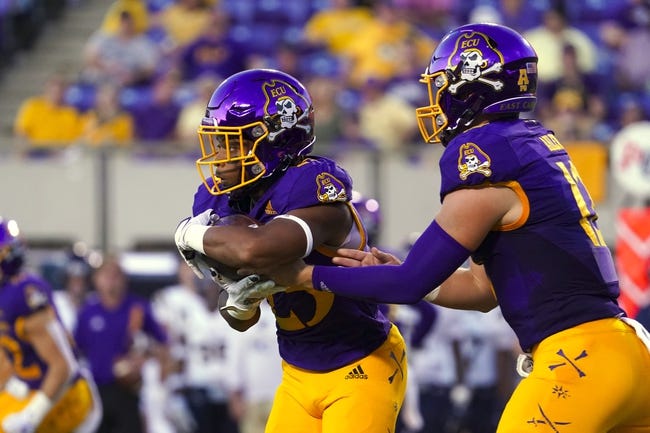 The East Carolina Pirates will travel to the Bounce House to take on the UCF Knights this Saturday night in College Football action.

The East Carolina Pirates won their 3rd straight game and improved to 3-2 on the season after defeating the Tulane Green Wave, 52-29, this past Saturday. East Carolina had no trouble generating offense against the struggling Tulane defense and had no trouble securing the victory after going into halftime with a 31-7 lead. East Carolina outgained Tulane by a 612-404 margin and won the turnover battle by a 4-0 margin in the victory. Leading the way for the Pirates was Keaton Mitchell who had 222 rushing yards & 2 TD’s on 15 carries.

The UCF Knights lost their 2nd straight game and dropped to 2-2 on the season after being defeated by the Navy Midshipmen, 34-30, this past Saturday. UCF looked like they were going to pick up the victory after going into the 4th quarter with a 30-17 lead, however, the Midshipmen dominated the Knights on both ends of the field for the remainder of the game and could not fight back after a 4-yard TD run by Navy’s Isaac Ruoss gave the Midshipmen the lead for good with 3:09 left in the game. UCF was outgained by Navy by a 406-326 margin and committed 2 turnovers in the loss. Leading the way for the Knights was WR Brandon Johnson who had 4 receptions for 79 yards & 2 TD’s.

UCF is known for their high-scoring offense, however, their has been some major concerns after allowing Navy, who was averaging just 10.0 ppg coming into their matchup, to put up 34 points against their defense in a stunning loss. East Carolina is a solid football team that is led by their offense that ranks 52nd in scoring offense & 34th in total offense and as I think the Pirates will have plenty of success putting up points in this one, I think the play here is to take East Carolina and the double-digit points. Good Luck!