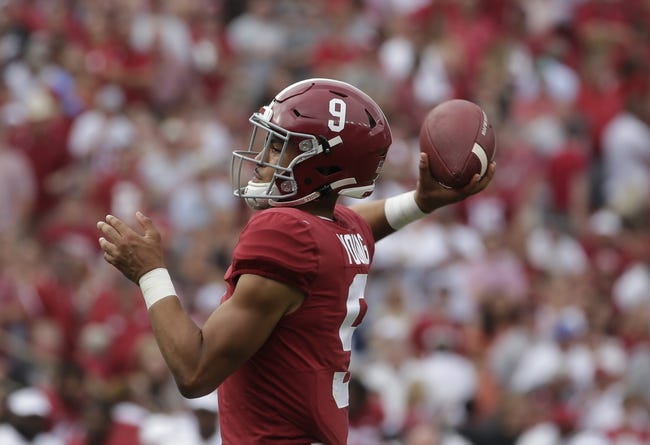 The Alabama Crimson Tide will travel to Kyle Field to take on the Texas A&M Aggies this Saturday night in College Football action.

The top-ranked Alabama Crimson Tide improved to 5-0 on the season after defeating the 12th ranked Ole Miss Rebels, 42-21, this past Saturday. Alabama did a tremendous job slowing down the high-powered offense attack of Ole Miss and had no trouble securing the victory after going into halftime with a 28-0 lead. Alabama outgained Ole Miss by a 451-291 margin and forced 1 turnover in the victory. Leading the way for the Crimson Tide was RB Brian Robinson Jr. who had 171 rushing yards & 4 TD’s on 36 carries.

The Texas A&M Aggies lost their 2nd straight game and dropped to 2-3 on the season after being defeated by the Mississippi State Bulldogs, 26-22, this past Saturday. Texas A&M once against struggled on the offensive side of the ball and could not fight back after a Makai Polk 20-yard TD reception for the Bulldogs gave Mississippi State a 24-13 lead midway through the 3rd quarter. Texas A&M was outgained by Mississippi State by a 438-297 margin and lost the turnover battle by a 1-0 margin. Leading the way for the Aggies was Isiah Spiller who had 100 rushing yards on 16 carries.

Texas A&M came into this season with high expectations, however, it’s been a struggle for the Aggies as they barley were able to get by Colorado and now have suffered back-to-back losses to Arkansas & Mississippi State. Texas A&M has been solid defensively, however, the offense has just not been able to get anything going under QB Zach Calzada who replaced their star Freshman QB, Haynes King, who was injured early in their game against Colorado. Alabama is once again the team to beat in College Football and come into this game ranked 3rd in scoring offense & 28th in scoring defense. Kyle Field is always a tough place to play, however, as the Aggies could not handle Mississippi State at home, I don’t think they stand a chance against Alabama and as I don’t see the Aggies scoring many points in this one, I think Alabama wins this one by three TD’s and covers this spread. Good Luck!