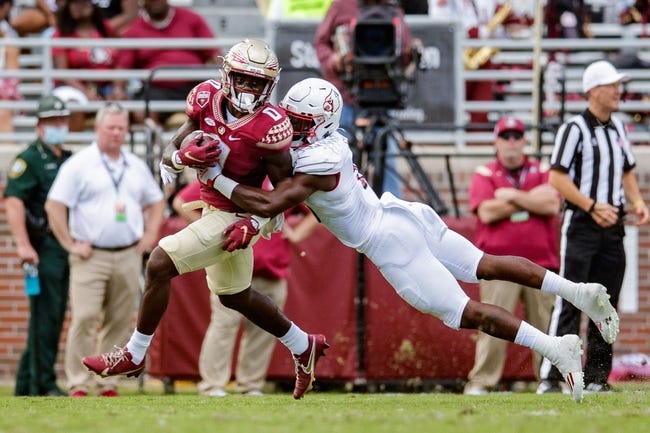 The Syracuse Orange will head on the road to face the Florida State Seminoles this Saturday in an FBS College football showdown. Florida has won 11 of 13 all time meetings between these programs.

The Orange are now 3-1 after a last-second field goal proved to be the difference in their win over Liberty last time out. Syracuse only racked up 305 yards of total offense, with QB Garret Shrader going 6/15 for just 77 yards. Sean Tucker was most of the offense, carrying the ball 32 times for 169 yards and a score. He also led the team with two catches.  On defense Syracuse allowed 369 yards, with Liberty doing a good job through the air and on the ground.  A late fumble by Liberty QB Malik Willis led to the Orange’s game winning field goal. To start the year, Syracuse ranks 108th with 176.3 passing yards per game and 20th with 216 yards rushing. They have average 30.5 points per game while allowing 17.8 to the opposition.

Florida State is still searching for their first win after a 31-23 loss at home to Louisville. The Seminoles accumulated 453 yards of total offense in the game. QB McKenzie Milton was 24/39 for 248 with a touchdown and an interception. Jashaun Corbin led the rushing attack with 159 yards on just 11 carries with one touchdown.  The defense they allowed the Cardinals to convert on nearly 50 percent of their third down conversions, giving up 395 total yards in the game. To start the season, Florida State ranks 96th with 196.3 passing yards per game and 42nd with 190.5 on the ground. The Seminoles average 23 points per game and are surrendering 31.8 to their opponents.

The Seminoles have yet to muster a win but they have been in some close games. They nearly knocked off the 9th ranked Fighting Irish in week one, losing 41-38. Syracuse’s defense looks good on paper, but they have not had a difficult schedule to this point. In their most recent loss, Florida State was able to move the ball with a balanced attack, so expect them to find ways to generate points against the Orange. Syracuse’s offense has too many issues and cannot be trusted to keep pace in this game. Give me the Seminoles at home.