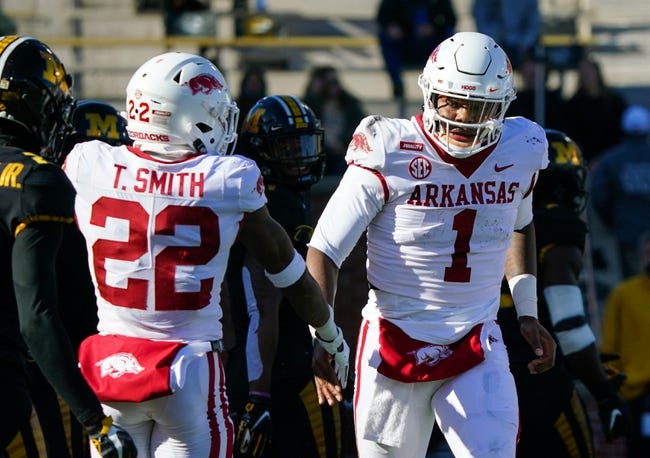 The 7th ranked Texas A&M Aggies improved to 3-0 on the season after defeating the New Mexico Lobos, 34-0, this past Saturday. Texas A&M was outstanding defensively against New Mexico and had no trouble securing the victory after going into halftime with a 24-0 lead. Texas A&M outgained New Mexico by a 429-122 margin and forced New Mexico to commit one turnover in their victory. Leading the way for the Aggies was RB Isaiah Spiller who had 117 rushing yards & 1 TD on 15 carries.

The 16th ranked Arkansas Razorbacks improved to 3-0 on the season after defeating the Georgia Southern Eagles, 45-10, this past Saturday. Arkansas had no trouble piling on the offense against Georgia Southern and easily crushed to victory after a 60-yard TD reception by Warren Thompson gave the Razorbacks a 31-10 lead early in the 3rd quarter. Arkansas outgained Georgia Southern by a 633-237 margin and didn’t commit a turnover in the victory. Leading the way for the Razorbacks was QB KJ Jefferson who completed 13 of 23 passes for 366 yards & 3 TD’s.

Texas A&M has a bunch of talent, however, I’m a bit concerned about their offense after losing Haynes King in their game against Colorado. The Aggies struggled on the road putting up points against Colorado and I can’t say I’m convinced that Zach Calzada can deliver until I see him do something against someone better than New Mexico. I had questions coming into the season about the Arkansas offense, however, KJ Jefferson has been outstanding and as I think Arkansas has a good chance winning this game outright at home, I think the play here is to take the Razorbacks and the points. Good Luck!