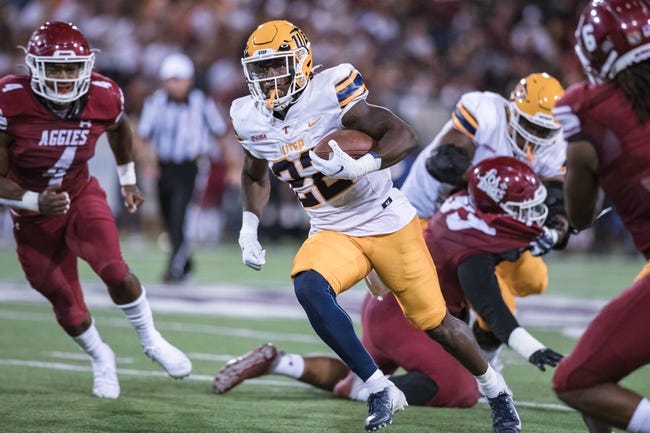 The New Mexico Lobos will travel to the Sun Bowl to take on the UTEP Miners this Saturday night in College Football action.

The New Mexico Lobos had their 2-game winning streak snapped and dropped to 2-1 on the season after being defeated by the 7th ranked Texas A&M Aggies, 34-0, this past Saturday. New Mexico had no answers on the offensive end against the stout Texas A&M defense and could not fight back after going into halftime trailing by a 24-0 margin. New Mexico was outgained by Texas A&M by a 429-122 margin and committed one turnover in the loss. Leading the way for the Lobos was RB Aaron Dumas who had 49 rushing yards on 10 carries.

The UTEP Miners dropped to 2-1 on the season after being defeated by the Boise State Broncos, 54-13, on September 10th. UTEP struggled protecting the ball against the Boise State defense and could not fight back after going into halftime trailing by a 42-13 margin. UTEP was outgained by Boise State by a 461-336 margin and lost the turnover battle by a 6-1 margin in the loss. Leading the way for the Miners was WR Jacob Cowing who had 6 receptions for 112 yards & 1 TD.

This is not going to be the most exciting of games on Saturday night, however, I really do like the position UTEP is in as a small favorite at home. New Mexico offense doesn’t have many weapons that UTEP should not be able to handle and as I think the UTEP passing attack will have success against the Lobos, I think the Miners win this one by at least a FG and cover this spread. Good Luck!