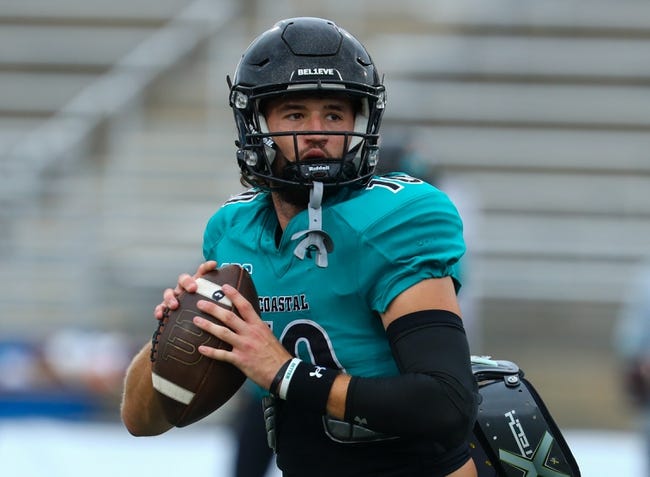 The UMass Minutemen will travel to Brooks Stadium (SC) to take on the 17th ranked Coastal Carolina Chanticleers this Saturday afternoon in College Football action.

The UMass Minutemen dropped to 0-3 on the season after being defeated by the Eastern Michigan Eagles, 42-28, this past Saturday. UMass trailed by a 21-7 margin at halftime and could not fight back after a 10-yard TD run by the Eagles Jawon Hamilton gave Eastern Michigan a 35-14 lead with 12:36 left in the 4th quarter. UMass outgained Eastern Michigan by a 519-507 margin, however, lost the turnover battle by a 2-1 margin in the loss. Leading the way for the Minutemen was RB Ellis Merriweather who had 142 rushing yards on 23 carries.

Costal Carolina is no doubt the better team and here and should have no trouble securing the victory, however, this is a bunch of points to cover for a team that has struggled a bit defensively, especially against the run which ranks just 113th in College Football. UMass has an awful defense, however, their offense does have some weapons as they showed after putting up 28 points against Boston College and as I think UMass will be able to find the end zone a couple times in this one, I think the Minutemen do enough to get the cover. Good Luck.