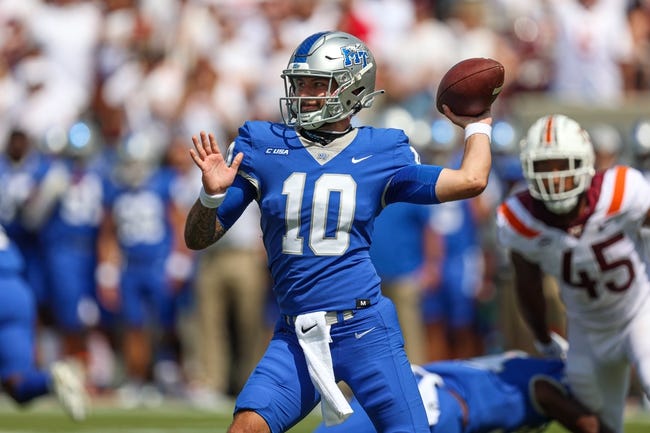 The Middle Tennessee Blue Raiders will travel to Jerry Richardson Stadium to take on the Charlotte 49ers this Friday night in College Football action.

The Middle Tennessee Blue Raiders lost their 2nd straight game and dropped to 0-2 on the season after being defeated by the UTAS Roadrunners, 27-13, this past Saturday. Middle Tennessee struggled early to get anything going on the offensive end against the Roadrunners and could not fight back after UTSA took a 24-0 lead early in the 4th quarter on a 3-yard fumble return for a TD by UTSA’s Lorenzo Dantzler. Middle Tennessee was outgained by UTSA by a 452-199 margin and won the turnover battle by a 3-2 margin in the loss. Leading the way for the Blue Raiders was QB Chase Cunningham who completed 9 of 18 passes for 150 yards & 2 TD’s.

The Charlotte 49ers dropped to 2-1 on the season after being defeated by the Georgia State Panthers, 20-9, this past Saturday. Charlotte struggled offensively on the road against Georgia State and could not fight back after a 28-yard TD reception by the Panthers Ja’Cyais Credle gave Georgia State a 13-9 lead. Charlotte won the turnover battle by a 2-1 margin, however, was outgained by Georgia State by a 423-276 margin in the loss. Leading the way for the 49ers was QB Chris Reynolds who completed 13 of 28 passes for 158 yards & 1 TD.

The public is on Charlotte heavy early this week as a slight favorite at home, however, I’m leaning towards Middle Tennessee who is I think is a better team that just had two very hard matchups against solid defenses in Virginia Tech & UTSA. Charlotte was able to beat Duke to start the season but didn’t look great against a Georgia State team that struggled to start the season and as I think the Middle Tennessee passing attack will be able to find some success against the Charlotte defense, I’m taking the Blue Raiders and the points. Good Luck!