The Ohio State Buckeyes and Alabama Crimson Tide face off on Monday in the CFP Championship game at Hard Rock Stadium in Miami.

The last time these two teams played was back in 2015 when Ohio State came away with a 42-35 victory..

There was some chatter that the Buckeyes didn’t even deserve a spot in the college football playoff because of their lack of games, but they seemed to prove why they did in the semi finals against the Clemson Tigers.The offense was elite for Ohio State putting up 49 points, and the defense also did a good job of making life tough on Trevor Lawrence. Quarterback Justin Fields had a big game putting up 385 yards, six touchdowns, and one interception. One issue for Ohio State is that Fields took a big hit against Clemson and he is still going to be sore in this game. On the season, Ohio State is averaging 43.4 points per game while their defense is giving up 22 points per game. On the season, Justin Fields has thrown for 1906 yards, 21 touchdowns, and six interceptions. The offense is going to need to be good for this team, but the defense is also going to need to step up in a big way.

On the other side of this matchup is the Alabama Crimson Tide who faced off with the Notre Dame Fighting Irish, and they had no issue coming away with a 31-14 victory. Wide receiver Devonta Smith had another big game catching seven passes for 130 yards and three touchdowns. Quarterback Mac Jones also completed 25 of his 30 passes for 297 yards and four touchdowns. On the season Alabama is averaging 48.2 points per game while their defense is giving up 19 points per game. Jones this season has thrown for 4.036 yards, 36 touchdowns, and four interceptions. Running back Najee Harris has also been running wild putting up 1,387 yards, and 24 touchdowns.

There are two plays that I really like in this game. I don’t expect much defense to be played in this game, which is going to lead to this game going well over the total. Ohio State is also going to find enough offensive success to keep this game close, and I actually like them to pull the upset outright. If you want to play it safe though, take the points. 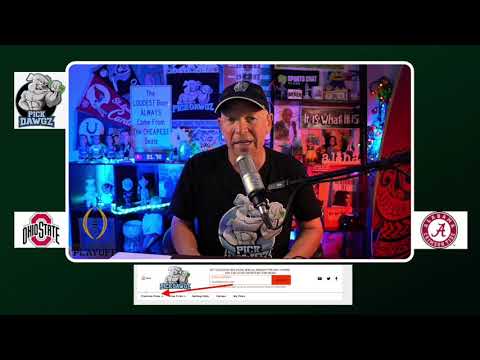