The 5th ranked Texas A&M Aggies and 13th ranked North Carolina Tar Hells will square off at Hard Rock Stadium on January 2nd in the Capital One Orange Bowl.

The 5th ranked Texas A&M Aggies finished their regular season with an overall record of 8-1 and finished 2nd in SEC (West) play with an 8-1 conference record. It was a slow start for the Aggies this season as they barely beat Vanderbilt to open their season and then quickly fell to 1-1 after a 52-24 loss at the hands of the top-ranked Alabama Crimson Tide. Texas A&M was able to bounce back quickly from their lost to the Crimson Tide with a 41-38 victory over Florida and put themselves into considering for the CFB Playoffs after reeling off 7 straight wins to close out their season. This will be the 12th straight Bowl game for the Aggies, and they will be looking to go 3-0 in Bowl games under Jimbo Fisher.

The 13th ranked North Carolina Tar Heels finished their season with an overall record of 8-3 while finishing t-4th in ACC play with a 7-3 conference record. North Carolina got off to a solid start to their season, which included a 56-45 victory over the 19th ranked Virginia Tech Hokies, however, the Tar Heels did suffer a few bad losses during the middle of their season against Florida State & Virginia. North Carolina won 4 of their last 5 games, including an impressive 62-26 victory over the 10th ranked Miami Hurricanes in their regular season finale. North Carolina will be playing in their 2nd straight Bowl game and will hope to make it two straight wins after defeating the Temple Owls, 55-13, in last year’s Military Bowl.

I’m looking forward to this matchup as I’m excited to see if the high-scoring North Carolina offense will be able to find success against the Texas A&M defense. North Carolina is a solid team, however, they rely on their offense which will be missing a big piece in Michael Carter and it’s hard to imagine that the rushing attack of the Tar Heels will find success against the Aggies 4th ranked rushing defense. Texas A&M in my opinion should have been in the CFP Playoffs over Norte Dame and as I think the Aggies will be able to slow down Sam Howell & Javonte Williams while putting up plenty of points in their own right, I’m taking Texas A&M to cover this spread. Good Luck! 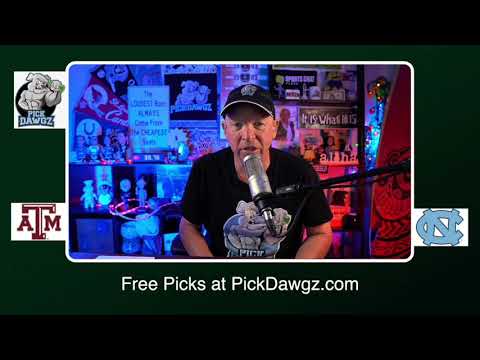